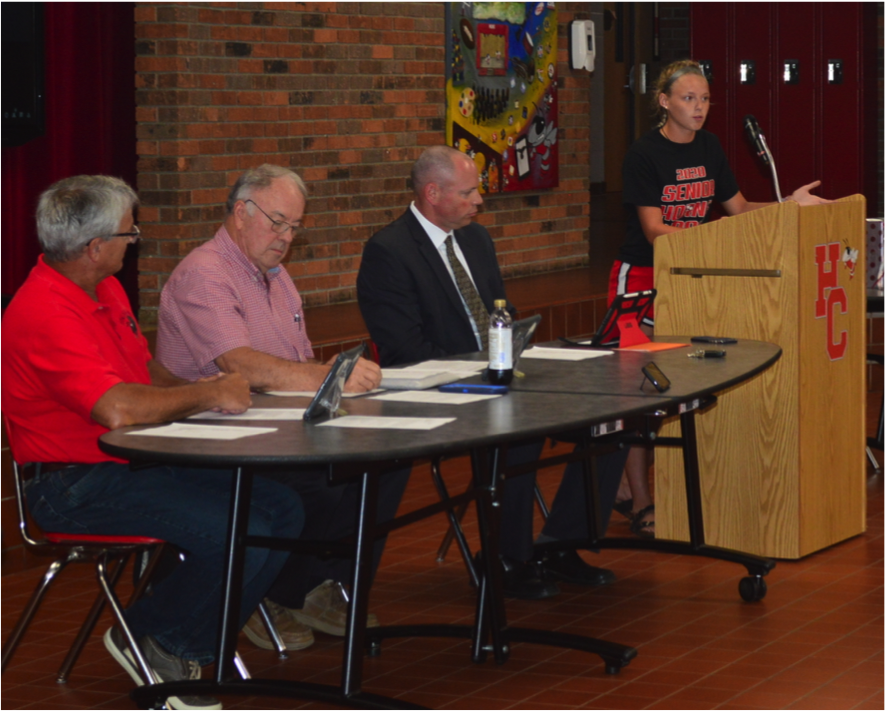 Hailie Lamar spoke first, and outlined several reasons why the school needed a new track. She said a new track helps to attract more students to the program, which brings new people into the community and provides an additional pathway to college for Hancock County students.
“Investing in the program invests in the futures of the kids,” Lamar said. “It promotes more kids to go into more activities post high school.”

She said an improved track also reduces liability issues for the school district. As a small community, the track serves more than just the student body. Many people from the community go to the school to use the track to exercise because it is basically flat.

Many people undergoing rehabilitation from an injury walk the track on a daily basis. Lamar said the current condition of the track presents the possibility of someone tripping and suffering an injury due to the cracks running across the track.

“There is grass growing through the cracks,” Lamar said. “There are speed bumps in the track. If you go to the back side closest to the highway we have two different ones where it is rising up, meaning those lanes cannot be used.”

Lamar said due to the condition of the track, she fears running on it because she fears injury. Lamar said she does run on it a couple of times per week, but does so in fear. She mainly runs along highway 60 though cars and semis zip past her at over 60 MPH.

“I feel safer running the highway and not risking rolling my ankle or some other injury,” Lamar said.
Tanner Dewitt spoke after Lamar, and provided examples of injuries he suffered running on the track. Dewitt graduated from Hancock County High School in 2019, but started running track his freshman year.
“I immediately broke the growth plate in my hip just due to running over the hard, uneven surface constantly,” Dewitt said.

Though he graduated in 2019, Dewitt said he continues to deal with injuries he suffered from running on the out-dated track surface. He likened the current track surface to a county back road.

Kenzie Severs spoke next. Severs currently runs track at Brescia University in Owensboro. Brescia’s track is coated with a rubberized surface, which cushions the impact when running on it.
“Just by running on that (track) compared to this (track) I have had so many less injuries,” Severs said.

While running track at Hancock County high school, Severs said the poor condition of the track caused her to suffer several hamstring injuries, shin splints and even having to wear a boot on her foot. Severs said running on the rubberized track at Brescia reduced her injuries, improved her from and made her body feel better.

Former coach Wes Meserve then took the floor and spoke. Meserve said Hancock County possesses a proud tradition when it comes to its track program. As a student at Hancock County high school, Meserve ran on three state championship squads, and as a former coach of the program his teams earned four regional championships.

“We have so much potential,” Meserve said. “I think our students deserve much better than what we have out there.” He said while the school system did not totally ignore the track, the school system resurfaced it a couple of times over the past few years, it also did not keep up with changes in the sport.

Meserve talked about the rubberized track surface first mentioned by Severs. He said in this area, only Hancock County and McLean County lack tracks with rubberized surfaces. He said the state of Indiana does not allow schools to hold meets if their tracks lack a rubberized surface.

Current coach Chris Hawkins spoke about the financial impact to the school by not being able to host track meets. She said a small 10-team invitational, when factoring in fees and concessions, nets around $7,000. “We could get probably one invitational for high school and one invitational for middle school each year,” Hawkins said.

She also said in addition to refurbishing the track, the board needs to address the issue of an improved concession stand at the track, restrooms and water. Currently anyone wanting water or to use the bathroom needs to go inside the high school.

After the track members spoke, Superintendent Kyle Estes addressed the issue. He said during his tenure at the board, the system resurfaced the track twice.
“There is something going on underneath in my opinion,” Estes said.

Board member Shane Ball said he knows nothing about running track, or about the shape of the track. Ball said he welcomed input to help him understand the issue better.
“Is there a team that could get together and educate us on what we would be purchasing, what we need out there?” he asked.

Meserve did mention that RBS Design Group is going to examine the track to see what needs to be done. Estes said it was important to see what the survey shows before making a decision on what to do next.
“I think that is the first step,” Estes said. “We need to figure out what we have.”