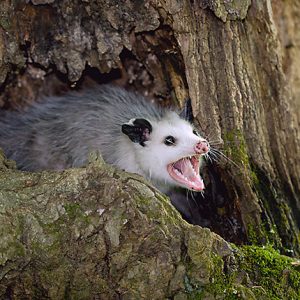 As a small child, even up until my late teens, I was my grandfather’s shadow. Wherever he went, I went. When I turned 11 or 12 my grandfather decided I was old enough to go with him when he checked his trap line in the winter.

He lived outside of Harned, KY on Buffalo Creek. His trap line went down Buffalo Creek all the way to Kingswood Lake, and into the hollows that branched off Buffalo Creek. Checking the trap line was an all day affair. We left shortly after breakfast, and arrived back home a little before dark. A couple of winters were extremely cold with temperatures sometimes well below freezing all day long.

My role in tagging along with my grandfather was to help carry an occasional opossum or two he caught in a trap. One day a funny incident happened—well I remember it being funny; my grandfather did not.
We started down the hollow checking his traps, and in the first trap we came to an opossum was in the trap. It was the biggest opossum I have ever seen! My grandfather found a limb about three inches in diameter, placed it over the opossum’s neck and lifted and twisted. We both heard a crack, and the opossum went limp. He removed it from the trap and handed it to me to carry. I slung it over my shoulder and off we went.

About an hour later, after checking several traps and finding nothing, we arrived at another trap and it had been thrown, but nothing was in it. As my grandfather reset the trap, I plopped the opossum down on a large rock near the trap site. When I did, I noticed the opossum began to urinate. I again told my grandfather the opossum was not dead as it just urinated. He said it was just nerves.

This situation went on for most of the day: I kept telling my grandfather the opossum was not dead because of some movement I saw or felt from it, and my grandfather kept answering it was just nerves twitching in the animal. Finally we arrived at the last trap in his line, and it was empty. My gripped slipped on the opossum again, and I felt the opossum’s tail tighten on my hand. I said to my grandfather, “this opossum is not dead. Its tail just tightened on my hand!”
In my entire life, I never heard my grandfather utter a cuss word; he did that day! “Give me that damn opossum,” he said. I handed it over to him.

He pounded a nail into a tree, tied the opossum’s feet with a string and hung it from the nail. My grandfather kept his pocketknife scalpel sharp, as it was the knife he used to skin the animals he trapped. Also, he never skinned an animal at a trap site to keep from giving away the location of the trap. This day he was angry and did not care!

He grabbed one of the opossum’s legs, the left one I think, and made a quick slice along the leg to the groin area. When he did, the opossum let out a very loud shriek! The opossum’s head was right by my grandfather’s ear; when the opossum shrieked, my grandfather jumped back, and I laughed hysterically and said, “I told ya it wasn’t dead!”

My grandfather then broke the opossum’s neck and skinned it. He failed to see the humor in the situation and did not speak to me the rest of the way home.