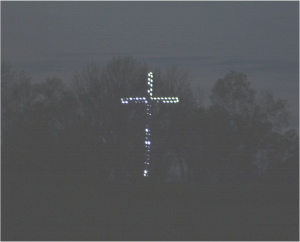 Roughly one month ago Byron Emmick and wife Bonnie received a letter from a man in Owensboro, Ky thanking them for the lighted cross they installed on their property. The man told them seeing the cross helped him during a low point in his life.

“In 2016 I had to close my business and get a job,” the man said. “I was at a very low point and felt like giving up every day. Your lighted cross would usually give me the hope I needed to press on.”

The unidentified man lost everything in 2016 including his home, Byron said. In the letter the man went on to say he now works in Tell City, Ind. and he sees the cross every morning on his way to work, and every afternoon on his way home to Owensboro.
“A few other people commented on how nice the place looks with the cross,” Byron said.

Byron told another story about how the cross inspired people at a low point in their life. About 18 months ago a westbound semi on U.S. 60 wrecked in front of his house, and Byron immediately went to give aid to the driver.

“I went running to the truck and the guy jumped out of the truck,” Byron said. “He was a preacher from Mississippi and he told me that when he way lying in the truck he looked up through the windshield and could see the cross and he knew the Lord was riding with him.”

The preacher, an African-American man, continues to come into this area on a regular basis. Whenever he passes by, the preacher hits his air horn a long blast to let the Emmicks know he is passing by.
“He felt very blessed and thanked me because the cross was there,” Byron said.

Byron said the idea for the cross came from oldest daughter Katrina Emmick.  At the time she attended Hilldale United Methodist Church, and worked in the youth group. She approached him and asked about installing a cross on the hill by Kasey’s house.
“I told her it would be fine and I would see what I could do,” Byron said.

At the time Byron provided transportation to some of the Amish in the area, and he talked to them about how to build the cross, and they provided him with the instructions necessary. He and son Kasey built the cross out of 2×6 beams, attached lights to it and ran an underground cable to it from Kasey’s house.
“We did it all in about a day,” Byron said.