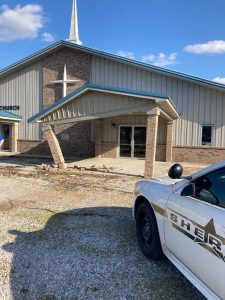 Anthony T. Logsdon, of Lewisport, turned left from Market Street into the gravel drive of First Baptist Church in Lewisport at an estimated speed of 20 to 25 MPH in a 2009 Yamaha YXR UTV, lost control of the vehicle due to going too fast on the loose gravel, knocked down the concrete block support for the church carport and caused the carport to collapse and pull away from the building.

The church sits at 235 Market Street. The UTV sustained moderate to severe damage. It did not require a tow.

Suburban hits Corolla
A two-vehicle accident at the intersection of U.S. 60 and state Route 2181 damaged two vehicles, but caused no injuries. The accident happened Friday, April 2 at roughly 2:15 p.m. Hancock County Sheriff’s Deputy Aaron Emmick filed the accident report.
Johnathan D. Banks, of Guston, KY. told Emmick that as he drove east on U.S. 60 in a 2020 Toyota Corolla a 2007 Chevrolet Suburban driven by James S. Ratcliff of Griffin, Ind. pulled from state Route 2181and slammed into the left rear of his vehicle. Ratcliff told Emmick he did not see the Corolla when he pulled out.
The Corolla sustained very severe damage and a wrecker from Bob’s Garage removed the vehicle. The Suburban sustained moderate to severe damage but remained in service.

Donna M. Farris told Emmick that as she drove west on U.S. 60 in her 2010 Chevrolet Cobalt, she encountered a 2013 Peterbilt model 320 trash truck owned by Freedom Waste Services and driven by Richard E. Bishop of Irvington, KY.

Farris said as she drew near to the truck, it started to slow and pulled onto the right shoulder of the roadway. She thought Bishop pulled the truck onto the shoulder for her to pass, so she started around the truck. Farris said the truck abruptly turned into her path and struck the passenger side of her car.

Bishop said as he drove west on U.S. 60 he crossed the double yellow centerline of the roadway, with half of his truck going over the line and into the eastbound lane. He said Farris’ car came out of nowhere and clipped the front of his truck.

Emmick said tire mark evidence at the scene indicated that Bishop’s truck went off the right side of the roadway, traveled approximately 60 feet, came back onto the roadway, crossed the center-line and impacted Farris’ car.

Emmick wrote in his report that Bishop admitted to taking prescription medication before he started his trash route that morning.