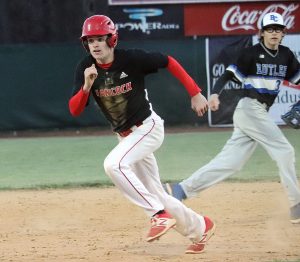 It was a back-and-forth battle when the Hornets and Red Devils played to extra innings here last Thursday. Hancock County claimed the victory over Owensboro when Cole Dixon stole home to win the game (10-9) in the eighth inning.

OHS plated a run in the first inning then Dixon foreshadowed what was to come later when he singled, stole two bases and scored on a passed ball.

Owensboro scored a run in the second to lead 2-1, but the Hornet offense took the lead in the home half when Drew Lyday, Hunter Severs and Andrew Boutcher all scored. Dixon then drew a walk, stole second and third bases before stealing home to give Hancock County a 5-2 advantage. The Hornets went up 7-2 in the third when Logan Willis scored on a hit by Jake Frames, who later scored on a hit by Lyday.

The visitors rallied in the fourth, scoring seven runs on a home run and multiple errors committed by the Hornets. OHS led 9-7 until Brock Tindle and Boutcher scored to tie the game in the sixth.
Tindle was on the mound in relief of Austin Volocko and the freshman sat down the Red Devils 1-2-3 in the fifth through eighth innings. The final two outs were recorded via the double play.

Boutcher singled to begin the bottom of the eighth, but was caught attempting to steal second base. Dixon then doubled and advanced to third on a ground ball hit by Volocko.  OHS elected to walk the bases loaded, but the pitcher, Connor Hallmark, did not pay Dixon the attention he deserved. On the first pitch Dixon sprinted towards home plate and slid in safely to win the game!

Tindle earned the win on the mound, allowing no runs on one hit, with one K and one walk over four frames. Volocko allowed seven runs (one earned) on four hits, with six Ks and one walk through 3.2 innings. Luke Brown allowed two runs on three hits with one walk in 0.1 inning.