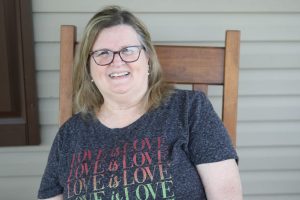 Cheryl Gammon was the first confirmed case of COVID-19 in Hancock County at a time when not a lot was known about the virus. She tested positive in late March of 2020 and by early April she was deemed recovered. Unfortunately for her, the lasting effects were just starting.

Some side effects from the virus didn’t even begin until months after she was officially recovered, she said, and one lasted into the fall.
During her battle with COVID-19 last year she said she began to recover after a few rough days, but she was left feeling very tired.

“Laying there I thought, hmm, I feel pretty good,” she said. “Getting up and just going to the restroom wore me out.”
That fatigue didn’t go away for a very long time.
“It hit fast and then it just took a while to build myself back up,” she said Monday. “I felt OK, I would get tired real easy and be out of breath.”

“It took me till about September to get over that,” she said.
The fatigue wasn’t as intense as it had been in the beginning, but it still affected her daily life.
“If we would go to Owensboro, say, and if we went to two or three places shopping, by the time we would get to number three I’d be saying you go in, I’m going to sit in the car, I’m just tired,” she said. “It’s like I couldn’t walk any further.”
“I love to mow the lawn. I couldn’t mow the lawn all last year,” she said.

She was supposedly recovered from the virus, and although she’d heard that it could take a while to regain her strength and energy, she began to wonder if she might be ignoring something major.
“I went to a heart doctor, I had all the different tests taken to make sure I didn’t have any heart damage. I got a clean bill of health there,” she said. “I just did everything that I could do to get checked out, you know blood work and all that stuff.”

She even had a respiratory test done, which also came back OK.
Her doctor eventually put her on prenatal vitamins and said her fatigue was just a lingering effect of COVID-19.
But it wasn’t the only one.

Around June, her hair began to fall out.
“When my hair was falling out I thought, what is going on here?” she said. “When I’d get up in the morning, on the floor there would be like balls of hair, and I knew that wasn’t right. Something was wrong.
“I didn’t really get too upset about it until I could tell when I would feel my hair, how thin it was getting,” she said.

She called her same doctor, who said this was also a known potential side effect of COVID-19, and that she should begin taking zinc.
She hadn’t needed any medications while she fought to overcome the virus, but the side effects now require two daily vitamins.
“I’m still on both of those,” she said. “Probably I’ll have to take it the rest of my life.”

Being the first person to test positive in the county doesn’t come with any privileges, although it did mean Gammon was paying attention to it early on and had a unique inside perspective before anyone else here did.

“I was shocked how that spread, just the way it did all over the place,” she said. “I did not think we’d have as many people in Hancock County come up with it.”
As of April 7, 2021, the Green River District Health Department had the county’s total of confirmed positive cases at 812.

Gammon’s husband George, who had quarantined with her last year without contracting the virus, isn’t likely counted in that number but he apparently was positive at some point too.
The couple gives blood and during a test for the COVID-19 antibodies that signify having had the virus, he had them.
“He had antibodies,” she said, “so at one time he had it but he just had no symptoms.”

Gammon doesn’t consider herself completely free of the fatigue that followed her most of last year, but said that it’s less common than before and she’s learned to handle it by getting good rest.
“I feel fine and looking forward to this summer,” she said.