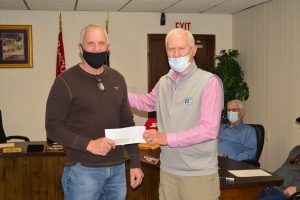 Magistrate Mark Gray appeared before the Hawesville City Council Tuesday evening and presented a $4,000 check to the city of Hawesville to pay for an automotive lift the city recently purchased. The city purchased a lift that holds up to 10,000 pounds, which allows city workers to work on and repair vehicles. Gray used the discretionary funds allocated to him from Hancock County Fiscal Court to pay for

Hawesville Supervisor of Utilities Todd Adkins said the lift already helped save the city money. He said one of the city’s Ford service truck’s transmission started to act up, and they were going to send it

Workers used the lift to raise the truck and drop the transmission, and discovered the transmission itself was okay, but a problem existed with some sensors. They replaced the sensors at a cost of about $300, which saved the city a minimum of $900 on the repair, Adkins said.

Mayor Charles King said the city purchased the lift in an effort to save the city money. Several of the city workers are excellent mechanics, and the lift allows the city to take advantage of their ability and perform in-house mechanical repairs.

In other action, the city council approved the minutes of the last city council meeting, and also paid the claims. The city went into executive session to discuss sewer plant issues with Matt Curtis of Bluegrass Engineering and Supervisor Adkins.