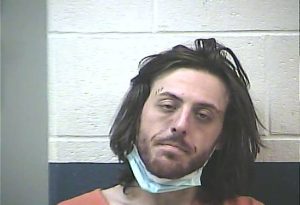 A 27-year-old man is facing auto theft charges after police say he stole a pickup, got it hung up, and then forced a stolen generator underneath it in an effort to get it free.

Tyler Shane Hylton, 27, whose last address was listed as Reynolds Station, was arrested Monday morning as he tried to free the stuck pickup on state Route 1700.
A man in the 100 block of Easton-Cabot Road called at around 5:37 a.m. on January 4 saying his 1991 Ford truck had been stolen, said Hancock County Sheriff’s Deputy Frank Howard, who investigated the incident.
“He went outside and he could hear his vehicle and he thought that it was either on Highway 1700 or Easton Cabot Road and it sounded like it was hung up,” he said.
Howard and deputy Aaron Emmick responded to the area, which was nearly a 20-minute drive from where they began.

In the meantime a woman driving past also called 911 to report a man who’d slid off the road and was struggling to free his truck.
“It took us a little bit to get there and I thought man by the time we get there he’s going to be gone,” Howard said. “But then the complainant kept calling in saying I still hear my truck, I can’t see it but I can still hear my truck and somebody’s revving the motor up.”

The deputies arrived and found Hylton still with the truck.
“He had the vehicle jacked up, and believe it or not he had a generator up underneath the truck trying to jack it up,” he said. “I could not believe it… He tried everything in his power. He had two tires up underneath it with the jack on the tires trying to get this thing, and the generator up underneath it.”
“We asked him who the vehicle belonged to,” he said. “At first he said it was his uncle’s and then we asked him again and we said look, you didn’t have permission to drive this vehicle, did you? And he said no, it’s stolen.”
“I still don’t know how he ended up losing control of it because it wasn’t in a very bad area, unless he just took his eyes off the road,” he said. “It wasn’t really wrecked, it had just run off the road and he just got it stuck.”
Hylton was placed under arrest, but the original caller asked Emmick to come to his house because there were other things stolen, namely a generator.

“We do know that the generator was part of the theft,” Howard said.
Why Hylton stole the truck isn’t known at this time, Howard said, and although he has denied knowing the owner, Howard suspects that maybe there’s a tie there they haven’t discovered yet.
“One thing that we did find kind of odd… the victim said there was something he had to push to start the truck and hardly anybody knows about that,” Howard said. “I don’t know if maybe a friend of his maybe talked about it or he has talked about it and it got back to certain people. But the sheriff did ask him, he said do you know the owner of the truck and he said no.”
The site of the theft was rural and not somewhere Hylton would have necessarily just happened past unless he lived in the area.
“I don’t want to assume but if I was a betting person I would say that somebody dropped him off,” Howard said.

Hylton was lodged in Breckinridge County Detention Center as of press time facing charges of theft by unlawful taking of $500 or more but less than $10,000 and burglary third degree.
“There might be some additional charges because I do know the generator was damaged and probably the truck was damaged with him trying to jack it up and putting that generator up underneath it and stuff like that,” Howard said. “So if it goes to the grand jury we’ll probably be adding additional charges.”