FacebookEmail
| logout
If you’re 70 or older and live in Kentucky, you may be able to get vaccinated against the novel coronavirus in about a month.
That will be a younger threshold than in most states, because Covid-19 deaths in Kentucky are disproportionately among residents of nursing homes, Health Commissioner Steven Stack said as he and Gov. Andy Beshear laid out the second phase of vaccinations in the state.
The second phase will include people 70 and older, K-12 educators, and first responders who were not included in the first phase, which is for residents of long-term-care facilities, facility employees and other health-care workers who work in places where care is provided.
The Centers for Disease Control and Prevention recommended to states that the second round include workers key to the function of society, including teachers, police officers, firefighters and grocery workers, and people over 75.

Covid-19 fatalities have been nursing-home residents, while the national share is 40%.
Beshear said the second phase, officially called Phase 1b, will begin Feb. 1, “plus or minus a week,” depending on availability of vaccines, and will take most of February.
The next step, Phase 1c, would be for people 65 and older, essential workers not included in the first two phases, and those 16 and over who have high-risk medical conditions. Stack said the latter group is “staggeringly enormous,” numbering 110 million nationally. Kentucky has a larger percentage of high-risk individuals than the national average.
With only 50 million doses of vaccines expected to be available in the U.S. by March 1, Stack said, “There’s not enough to get to all these people by March,” so the state will have to determine subgroups and their priorities. “If they weren’t further subdivided, there’s no way we’d get through these in a reasonable and orderly fashion.”

Beshear said, “We’re building the airplane while were flying it. I’m sure there are going to be mistakes all around.” He added later, “The virtue I’ve got to ask everybody to show is patience, and its going to be harder and harder and harder” as time goes on. “Please have patience; I know we’re doing the best that we can.”

The first known miscue in Kentucky’s vaccination plans came on Christmas Eve, when two Walgreens pharmacies in Louisville and Lexington made the Pfizer Inc. vaccine available to the general public after the company thawed too many doses for nursing homes, which it serves under a federal contract.

Beshear said he didn’t know how many doses were involved, but said the company should have taken them to the next nursing homes on its schedule. He said the state doesn’t “have operational control” over the Walgreens and CVS contracts for long-term care, but “We’re gonna be working with these facilities to make sure the right thing happens next time,” and if another nursing home can’t be served in time, distribution should be limited to people who are most at risk.

“We have to understand that with an undertaking this massive, mistakes are going to happen,” the governor said. “I don’t think it was intentional, but it should have been done differently.” He said Walgreens will have to follow up with the lucky recipients to make sure they get their second dose.

Walgreens told Lexington’s WKYT-TV that a nursing home needed fewer doses than it requested, and in such cases offers the vaccine to first responders and then Walgreens employees before offering it to the general public. Once thawed, the vaccine is supposed to be used within 12 hours.

Health and Family Services Secretary Eric Friedlander said about 3,000 residents and 2,500 employees in more than 30 Kentucky nursing homes had been vaccinated. “This is a great start,” he said. “We’re making a down payment on the promises to take care of those who are most vulnerable first. We’re learning as these roll out what the best way to proceed is.”

Daily numbers: The state reported 1,455 new cases of the virus, lowering its seven-day rolling average to 2,040, the lowest since Nov. 10. Beshear said reporting was limited due to the holidays and perhaps by disruption of communications systems by the bombing in Nashville, but another leading indicator, the percentage of Kentuckians testing positive for the virus in the last seven days, again fell below 8%, to 7.97%.

“I believe now we’ve not only plateaued it,” Beshear said, “we’re starting to see cases decrease.” He said his bans on in-person schooling and indoor food service, and other restrictions imposed in mid-November, “made a real difference” both in cases and demand on hospitals. 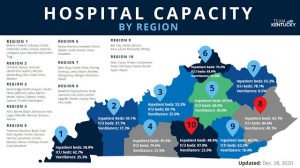 Beshear noted just two of the state’s 10 hospital readiness regions have more than 80% of their ICU beds occupied; he did not note that the Lake Cumberland region is using 97.8% of its ICU capacity, as one of his slides and the state’s daily report notes. The region has been a hotbed of cases recently.

Beshear memorialized Dr. Don Miller of Bowling Green, who died of Covid-19 on Dec. 21. He was an emergency doctor at Med Center Health and had 11 children. His boss, colleague and good friend, emergency director Dr. William Moss, paid tribute in a video during Beshear’s press conference.

In other coronavirus news Monday:

Email This BlogThis!Share to TwitterShare to FacebookShare to Pinterest