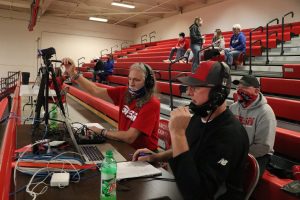 With COVID-19 restrictions turning meetings into video conferences, office work into working from home and students into home learners, now is the time to shine for the Third Region Sports Network, the 10-year-old online streaming service run by five local men that allows viewers to watch live games from the comfort of YouTube.

The network, called 3RSN for short, is run by Todd Keown, Joe Kreisle, Dwayne Wroe, Kevin Linn and Danny Gray, and it began in 2010 when Keown was attending a game in Cannelton and saw that they were streaming on a service called IHigh.com.
He asked some questions and contacted IHigh and then got with the other four and they decided to begin streaming Hancock County games on the site as well.
None of the men had any real tech experience, and especially not in something like live online video streaming, which is still a new thing to large segments of the public even today.
“A lot of trial and error,” said Joe Kreisle.

IHigh hosted their livestreams and they had a contact there who helped them out when they didn’t know what to do or had issues.
“He had to hold our hand through everything,” said Keown.
“Of course we had bare bones equipment,” said Kreisle. “They should’ve doubled his salary for as many times as me and Todd called that guy and heckled that guy.”

The guys got started in March 2010 and their debut was streaming an HCHS girls’ softball game, but it didn’t go exactly as planned.
“It was audio only because we didn’t have everything figured out,” Keown said. “And then our first actual stream was McLean County and Hancock girls’ softball.”
Despite trying to figure things out as they went, the guys got a confirmation of the value of 3RSN in spring of 2010.
They were preparing to livestream a baseball game at Dawson Springs where Hancock County was set to play Fort Campbell when Keown asked the opposing coach for their lineups. When he coach asked why they needed it Keown said the game video would be streamed online live.
“Some of their kids heard that and they made a mad dash into their dugout and started getting their phones out and we go what’s going on?” Keown said. “He said well I’ve got four kids on my team that their mother or father’s in Afghanistan and if they can get a hold of them they can watch them play.”

Depending on the sport, there might be two guys calling the game, with one of them running the camera for the livestream. Each of the guys has a certain specialty of sorts, depending on the season.
“Kevin and Joe do football, me and Dwayne do basketball, and then Joe does softball,” Keown said. “And Danny does basketball too and he kind of fills in for any of us.”
They are local guys and they root for their team, the Hornets.
“We’re for Hancock County and we don’t apologize,” said Kreisle. “Now we’re not going to disrespect our opponent, but we’re for Hancock.”
Getting community and school support for the network in 2010 was easy, but getting financial support wasn’t so much, he said.
“Let me tell you that was a tough sell when we first started,” he said. “And then how do you give sponsor fees to something you don’t even know if it’s going to work? But they did, and we’ve got some sponsors that’s been with us the whole time.”

Support in other counties wasn’t always there, at least in the beginning.
“Some schools think it hurts their attendance,” said Wroe. “They wouldn’t let us do some stuff at Meade County because they said it would hurt their attendance. People would stay home and watch it.”
The school was hosting the third region tournament and the championship game was between Daviess County and Muhlenberg County, both of which were at least a two hour drive for parents, and it was on a weeknight.

The championship game wasn’t a sellout.
“They blamed that on us,” said Kreisle.
Some opposition has been more direct.
“We got verbally attacked by a coach at Caldwell County and he was as big as that doorway,” said Kevin Linn.
The guys were all wearing their red shirts and looked like they could be coaches from another team.
“He thought we were coaches and we were encroaching on their spot on top of the press box where they were going to be to coach the game,” said Keown.

Other coaches liked the videos, but not necessarily for reasons that help Hancock County.
“Coaching-wise your kids get seen by coaches, but also other coaches can scout you,” said Wroe. “I’ve had softball coaches tell me they’ve watched all of our games and it’s one of our rivals in Class A… That was one of the drawbacks as far as knowing how to pitch to kids and stuff like that.”
Overall though, 3RSN was well-received and supported by locals and opponents alike.
Eventually 3RSN moved on from IHigh and began streaming with BlueFrame Technology, which lets them stream live directly to YouTube.
Now they’re using Mac computers and they’ve gotten improved wireless speeds and better cameras, so the quality is very good.
“I was out of town one game and like I’ve heard so many other people do, I put the game up on your big screen. I’ll tell you what, it ain’t bad,” said Kreisle. “I can’t tell you how many people do that, especially this year.”

This year has been different with people stuck at home due to COVID-19, and the network has seen its streaming numbers rise.
“Every state in the union has hit our site and about 10 or 12 countries,” he said.
Having a captive audience due to COVID-19 meant more views, but it’s also bringing out the competition, namely in the form of the Kentucky High School Athletic Association, which has begun trying to route viewers to its own streams and to keep others out.
“The KHSAA, they’re already trying to get you to go through their different options so they can get their hands in some money-wise,” said Wroe.
“They work through a group,” said Kreisle. “They kind of come in and have you buy their cameras, and then the streaming packages are out there it’s like you buying a ticket, and I’m sure the school’s coordinated through it somehow.
“Used to you could watch the Class A, AA, AAA football for nothing. You can’t now. It costs,” he said.
“I do think there’s a future though,” he said. “Now whether you wind up having to do it in conjunction with somebody else, I don’t know.”

To view live games visit 3rsn.com or search for them on YouTube.
dave.hancockclarion
@gmail.com