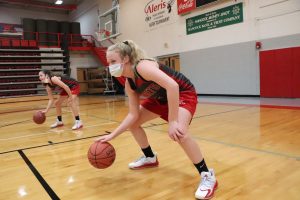 Basketball season is a go following a decision by the KHSAA’s Board of Control that was released on Dec. 10. Teams were allowed to restart practice on Monday, with the season set to begin on Jan. 4.
HCHS girls head coach Kevin Husk and his team are excited to be back on the court. Hornets head coach Mike Orr is “cautiously optimistic” about the season going forward.

“We talked with the girls and we kind of knew going in that this would be similar to what the falls sports (teams) have dealt with – the on-and-off and wait and go, along with changes in the schedule, and we’ve already seen a ton of that,” Husk said. “So we’ve focused on what we can control. When we’re here (in the gym) we work on getting better and a lot of the girls have been working hard on their own during the times when we weren’t allowed to practice.”

After a slow start to the season last year the young Lady Hornets turned things around, winning 12 of their last 19 regular season games. The girls expect to build on that momentum behind the leadership of seniors Haven Riley, Alex Kratzer and Megan LaClair. The team returns its leading scorers in 8th grader Karmin Riley (14 PPG) and sophomore Bailey Poole (12.1 PPG), while freshmen Lily Roberts and Ella House will play significant roles for the team.

“We finished well last year and we’re excited about having our three seniors mixed in with the younger group,” Husk said. “We have 7 of our top 8 girls returning and we’re confident. We know we’re not always going to be the favorites but we feel like we can compete with anyone on our schedule.”
Husk has toughened up his competition for 2021.  “We’re playing some other region champs and runners-up and I’m excited to test us and see where we’re at. The girls are hungry and ready to put up some numbers on the banners that are hanging in our gym.”
The Hornet boys team has a strong core of returning players who expect to improve on last year’s 10-17 campaign.
“When we have preseason conversations we talk about strengths and weaknesses of the team, and we’ll get to that, but right now we’re just glad we’re getting to play,” Hornets head coach Mike Orr admitted. “Priority number one for us here is the health and safety of our players and staff and for the parents who come and watch us play. It’s been difficult but the KHSAA is doing everything they can to make sure we get the season in.”

Teams will have 10 weeks to complete their respective seasons, playing a maximum of 30 games. The postseason will begin on March 15.
“We’re going to practice and go full steam ahead, and hopefully (the virus) doesn’t hit our team,” Orr said. “This season will be unpredictable, but our goals of competing for a district championship and making some noise in the regional tournament haven’t changed.”

The Hornets return their leading scorer from last year in Kaleb Keown. The 6–5 sophomore can score from anywhere on the court. Keown led the team from beyond the arc with 60 made 3’s.
Juniors Ryan Ogle and Devyn Powers are starters who can do-it-all, as well as classmate Evan Ferry, who has command of the floor at the point. Senior Ethan Stewart will compete for a starting spot, as will juniors Landyn Emmick and Dalton Flake. Football star Darian Clay has decided to join the team for his senior year. “He brings incredible athleticism and intensity to the program,” the coach said. Eighth grader Brady Atwell will also compete for varsity minutes this season.

“We were very competitive last year until we hit a wall. We were inconsistent, but that’s what you get when you’re relying on young kids. Hopefully they’ve made the jump to acclimate themselves to varsity basketball,” Orr said.
“We have to get better defensively and we’re committed to improving our man-to-man. Offensively, we know we can shoot the ball, and we have ‘bigs’ who can shoot. We’ll be able to put five kids out there who can make 3’s, so we can space the floor, but we’ll need some post presence and we have some guys who can play inside out. These kids are going from being boys to becoming men right in front of our eyes.”