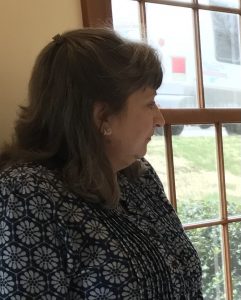 A Tribute to Tomi

As I sit down to write this blog I do so with a heavy heart. My coworker and friend Tomi Mathew passed from the coronavirus earlier this week.  I first met Tomi nearly 30 years ago when we both attended Kentucky Wesleyan College. We both were non-traditional students, being quite a few years older than the general student population.

We met in a class taught by Professor William Conroy, and found we both were from Hancock County. That was the only class we had together, and our paths diverged.
Fast-forward over 20 years, and our paths crossed again when she became a member of the Hancock Clarion staff.

Tomi liked to do things for people. She often brought things to us here at the Clarion.  On a regular basis she would say to me, “I am making some chicken noodle soup this weekend, do you want some?” I would say yes because she made great soup. When I came in on Monday morning, there would be a large container of soup on my desk. She was always cooking something, and often asked if I wanted some of it.

On more than one occasion I would arrive at the Clarion on a Monday morning, and find some shirts hanging on my door. I have no idea if she went out and bought them from a store for me, or if she found them at a yard sale. I can say she had good taste. In fact, most of the shirts I wear now are ones she gave me, including the shirt I am wearing as I type this article. But that was Tomi-she liked to help people in whatever way she was able.

I know her dog Molly was extremely important to her. She often told me stories of things Molly would do, and about her never-ending frolicking with the squirrels. And She would tell me about the squirrels and how they would dig in her flowers, which aggravated her to no end.

Tomi was a cheerful person, and saw the humor in situations, no matter what is was. She often would tell me a story, and start it with “It was the funniest thing!”
I do know everyone here will miss Tomi. The world is shining just a little bit dimmer today because her light is no longer here with us.

Posted in Blog and tagged A Tribute To Tomi, Hancock Clarion