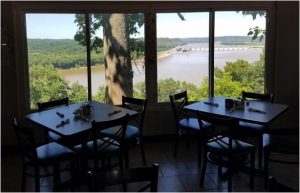 A few weeks ago Kentucky Governor Andy Beshear ordered bars and restaurants to close to dine-in traffic, and only allowed them to offer take-out, outdoor seating or drive-thru service. These restrictions forced Riverview Restaurant to close its doors for good.

“With this COVID thing going on, it has been kind of tough and we have been struggling with it,” Owner Emery Stutzman Jr. said.  Complicating the matter is his being Amish and not being allowed to open the restaurant on Sundays. When the governor forbade dine-in service, it forced the restaurant to offer take-out orders only. The restaurant does have an outside dining area, but with the calendar turned to December, outside dining really is not an option, leaving take-out only.

“That was not going to be profitable,” Stutzman said. “So I decided to close her up.”
Since its opening 50 years ago, Riverview Restaurant has been a destination spot for people wanting a good meal and great ambience. The restaurant sits on the side of the bluff overlooking the Ohio River, and affords a great view of the river as it winds its way through the countryside.

The restaurant also serves great food. Riverview is known for its buffet, and the amazing culinary creations of the cooking staff. From the salad bar, to its fried chicken to its sandwiches, people flocked from all over the area to enjoy delicious food.
When the restaurant closed, fourteen people lost their jobs, including five full-time employees, with one being manager Anita Arison.  “I hate it,” Arison said. “It is quite disturbing.”

Hannah Wheatley said she worked there nearly 10 years, but more importantly worked there through several major life changes. Wheatley said she decided to attend college while she worked at Riverview, and it helped her pay for her education. While she received loans for her schooling, she still needed to pay out-of-pocket each semester to attend. Wheatley majored in Elementary Education at Brescia, and plans to teach.

Stutzman said the business is for sale, and right now he is taking offers on the building. If the restaurant does reopen under new ownership, at least one former employee said she plans to work there again.
“I will 100-percent take my job back if someone would reopen it,” Wheatley said.