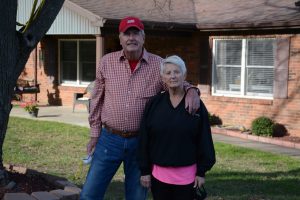 One local couple is just exiting isolation after testing positive for COVID-19, and they say that people need to take the virus seriously and not assume that symptoms are simply something else.  Sixty-seven-year-old Terry Lindsey and her husband Mack tested positive for the virus this month but they first thought their symptoms were innocuous.

“On October 22 I was feeling a little bad but I have allergies and stuff so I took some Benadryl because I’d been blowing leaves,” Terry Lindsey said.   She felt better the next day, but then on the 24th she began to feel really bad.
“I just couldn’t hardly go,” she said, “and I was thinking maybe I took too much Benadryl because that stuff makes you sleepy.”
She left her job as club manager at Windward Heights Country Club that afternoon and, she said, continued to get worse.

“Then my stomach started bothering me and I thought well I’ve got a 24-hour virus,” she said.
After two more days of that her daughter convinced her that she should get tested for COVID-19 because stomach distress is one of the symptoms. She traveled to Owensboro and got the test and waited for results.

“It was about 24 hours and they called me and told me that I tested positive for COVID, and I was just shocked,” she said. “I mean I had no clue that’s what was wrong with me.”

She isolated in her bedroom, but after a few days Mack started getting sick, but again they thought nothing of it.
“He started getting the bronchial, the lung thing, but he gets it every year,” she said. “But then he had it for like three days.”
They called a doctor and he said that since Terry was positive, Mack should test too, and his came back positive.

“It’s almost like seven days later he tested positive for COVID,” she said.
So while her isolation neared its 10-day end, she started a second one with her husband.
Each had a very different experience with the virus, but Terry said she preferred hers to Mack’s.

“I was almost glad I had the stomach part because at least you won’t go on a ventilator,” she said. “And Mack, I said one more night with him coughing like he was doing, he might have had to go to the hospital.”
But that doesn’t mean hers wasn’t bad.

“I’m going to tell you what, it was miserable,” she said. “Mine was like a horrible stomach flu. I mean, I could not eat for six days. I could barely drink.”

“Another symptom of COVID is a horrible taste in your mouth and you can’t taste any food and anything you put in your mouth tastes bitter,” she said. “I still can only drink water.”

Now that she and Mack are out of isolation her taste is slowly returning.
“I’m back to eating but after about three bites there’s no taste to it at all after that,” Terry said. “But I am so much better than I was, that I don’t care.”

They’re able to be out in public now, but Lindsey said they still take precautions just in case.
“We can be around people but I will tell you this, we wear our mask everywhere we go,” she said. “We can’t infect anyone but we always wear a mask around everyone anyway.”