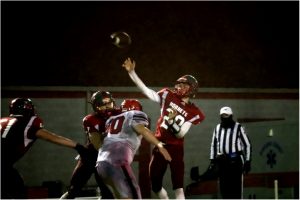 The Hornets kept the dream alive when they crushed Todd County Central 36-0 during a rainy playoff game at HCHS’s Schafer–Glover Field Saturday. Hancock County will now advance to play Owensboro Catholic in round two of the Class 2A football playoffs here Friday.

“Coming out of a two week period where we weren’t practicing and for them to come out ready to play like they were… I was really proud of them,” HCHS coach Bobby Eubanks said.

Saturday’s game was a defensive battle throughout the first quarter and beyond. Todd Central mounted a drive that carried over into the second period until a fumble was recovered by Hancock County at the home team’s 32 yard line.

The Hornets faced a third–and–nine at midfield when coach Eubanks called a pass play. Cole Dixon stepped back, threw from the pocket and delivered the ball to Austin Volocko down the right sideline for a 40 yard gain to the 10 yard line. Hancock County scored on the next play when Darian Clay took a handoff up the middle then cut to his right. The senior out ran defenders in a race to the end zone to give the Hornets a 6-0 lead. The Hancock offensive line did an excellent job of blocking on the play.

The Rebels advanced the ball to the 50 yard line on the ensuing drive and Preston Moore was in shotgun formation. A low snap by the center put the quarterback in a rush and his pass attempt slipped out of his hands… and into the hands of Jack Duncan. The sophomore linebacker intercepted the pass and headed toward the Hornets’ goal line. Duncan had a parade of teammates surrounding him as he rambled 48 yards to paydirt. The conversion attempt failed but the Hornets led 12-0 with under seven minutes remaining in the half.

“We knew it was going to take us at least a quarter to get our legs back underneath us and to figure some things out. Jack making that big play kind of got everybody started and it just went on from there,” the coach said.

Turnovers can kill a football team and Todd Central was a victim of just that on Saturday. On the Rebels next possession Moore sprinted around the left side for a nice gain when he was met by Sebastian Fredell. The senior defensive back hit Moore low, dislodging the ball and flipping the QB head-over-heels into the air. Aiden Weatherholt was Johnny-on-the-spot and recovered the fumble for Hancock County.

The Hornets took over in Rebel territory and Clay and Xander Early both gained good yardage on the ground. The ball was at the 21 yard line when Dixon handed off to Clay, who ran off left tackle then made a beautiful spin move on a would-be tackler on his way to the end zone. A 21-yard TD run followed by a 2-point conversion run by Dixon left Hancock County leading 20-0 with 4:17 on the clock.

The Rebels had their best chance to score late in the half when Omarion Riddick ran for a first down across midfield. Riddick was injured on the play by a helmet-to-helmet collision and a penalty was assessed on the play. Moore later went to the air and a pass to the Hornets’ end zone was nearly picked off by Volocko. On the next play the Rebels again went to the air and a sure TD was dropped by a Todd Central receiver.

Hancock County received the kickoff and the second half belonged to the Hornets. Landyn Emmick covered an onside kick and held onto the ball after being hit hard by two Todd Central players.

The Hornets took possession at their own 47 yard line, but the offense stalled. Volocko got off a great punt and Hancock County got a break when the Rebels were called for running into the kicker, giving the Hornets a first down at the Todd County 41 yard line.

Clay moved the sticks after a nice run then Dixon went to the air. The Hornets QB threw to his left and Fredell made a great play on the ball at the five yard line then skated into the end zone. The 29-yard TD reception followed by a conversion by Dixon left Hancock County leading 28-0 at the 8:02 mark of the third quarter.

Kaleb Keown then tried a squid kick and Noah Mize made the recovery for the Hornets. Hancock County took over on the Rebels 46 yard line and four plays later the Hornets were in the end zone again.
Runs by Mize and Early set up a second down at the 23 yard line when Dixon went back to pass. A near perfect aerial toss and a great catch by Volocko was good for another back-breaking TD. Mize converted the points after touchdown and the score was 36-0 with six minutes still remaining in the third.

By rule, when a team leads by 36 or more points the referees implement a continuous running clock. I suspect most in attendance were more than pleased with that as the rain never seemed to let up.

The Rebels did drive the ball deep into Hancock territory in the fourth quarter but the Hornet “D” stopped them on downs to preserve the shutout.
Hornet stats

The Hornets had 268 total yards, including 176 rushing and 92 passing.
Dixon completed 3 of 3 pass attempts for 92 yards and two TDs.  Volocko made two receptions for 63 yards and Fredell caught one for 29 yards.

Duncan and  Weatherholt made seven tackles each, and Luke Garrison made six stops. Christian Richards and Mize made five each, Clay four, Volocko three, Yadi Ochoa, Fredell and Keown all had two each, and Early and Emmick made one each. Richards, Fredell and Garrison all had forced fumbles, while Duncan, Weatherholt and Mize all had fumble recoveries. Duncan had the pick-6.