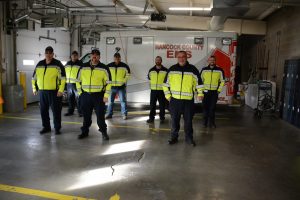 In the chaotic eight months since COVID-19 wreaked havoc on the world, the already chaotic lives of the county’s ambulance crews have gotten more so, with extra precautions and procedures and the reality that the pay is so low many of them work for more than one service.

“Usually EMS people, if you talk to any of them, we’ve got two and three and four jobs, just because the pay is so low,” said Kay Phillips, a paramedic with Hancock County but also McLean County.

Kay, who worked in ambulances in Owensboro for 35 years, recently resigned from there when a new company took over, and began looking for new work.
“I decided to seek part-time and Hancock County is a good option. They’re a little laid back,” she said. “And I elected to go to McLean County full-time for insurance.”

Despite being a licensed paramedic for Kentucky and Indiana, plus a national registered paramedic, and teaching EMT classes in McLean County, she and other EMTs and paramedics have to work for multiple agencies to make a living.
“I also work Owensboro and Perry County as well,” said Damian Rice, the EMS director for Hancock County, who oversees all of the ambulance and 911 services.

Rice has worked for Hancock County since 2010, and became a paramedic around 2013. He’s led the service for three years now and he said local EMS workers take shift at other agencies because of the pay differences. Perry County pays around $20 an hour while Daviess County is around $18, but Hancock County is below $12.

Hancock has 12 full-time EMS and two full-time ambulances, plus eight part-time workers and two backup ambulances that can be called to service on busy days.
On each run an ambulance generally has one paramedic and one EMT, and Phillips said most people don’t know the difference.
“A lot of people don’t realize, we just don’t throw people in the back of the ambulance and drive real fast,” she said. “There’s a lot of things that we can do.”

An EMT can give standard first aid, she said, and advanced EMTs can start IVs and give some medications, and paramedics can do chest compressions and intubation, as well as giving medications for reactions, diabetes, mental issues and heart attacks.
Worries over COVID-19 have changed the way EMS responds to calls, with greater precautions and additional sterilizing procedures, but they’re quickly becoming the new norm.

“If we go into a house right now that we don’t know, we’ll have our gloves on, we’ll have our mask on, which is N95s, and you can go beyond that if you want to,” she said. “Now if they were positive we know, there is some extra equipment that we put on that goes beyond the standard procedure that’s more of the face shield, a different, heavier mask and also they have gowns we can put on and now they’re ordering footies.”

Once they arrive at the hospital they remove their protective gear and leave it there and get all new linens and gear for the ambulance to get ready for the next run.
“Nothing goes back with us. Everything’s left,” she said.
The ambulance itself gets a decontaminating mist after each run and then an extra dose each night, which cleans all surfaces for any germs.

While the numbers of COVID-19 patients continues to climb, the total number of annual runs is actually lower this year compared to last year, Rice said.
“We’ve actually decreased quite a bit,” he said.

Hancock County has had around 915 runs so far in 2020, but that’s fewer than 2019.
“Last year we had roughly 1,100 or so,” he said.
Fewer runs isn’t completely a good thing because while it means fewer people are needing help, it also means less revenue for the service, which is paid for partly through Medicare and other providers.

“Being a municipality, you don’t really make much off of it, you’re providing a service as opposed to making any money, but anything to offset payroll,” he said.
Each run though, is important, said Phillips.

“I think children is the hardest runs that we have to make, when it involves children,” she said.
“I had a child that was abused pretty severely and it was unconscious, and that’s hard to deal with… There’s also one that was actually murdered in Gabe’s Tower one time. I made that run and that was hard,” she said.

“The good thing about it is you have the camaraderie of your people, of the EMS, your folks,” she said. “And a lot of us talk about the runs…  or just cried with each other, or prayed with each other.”