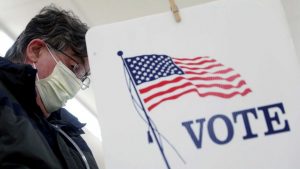 COVID-19 will mean wholesale changes to the November election process locally, which will make it easier vote, and which promises to push turnout numbers to abnormally high levels.

Nearly every single thing about voting on November 3 will be different in some way, starting with the locations. Previously in Hancock County there have been 10 precincts and voters were required to vote at the location dictated by their address. Not so this year.

“Because we’re not going to be able to open up all 10 precincts we are going to open up super centers and give people two or three places to vote regardless of where they live,” said Hancock County Clerk Trina Ogle. “They’ll be vote centers and anybody can vote at any one of those centers, so if… you normally vote in Hawesville but you’re in Lewisport for the day working or going to the store or whatever, then you can vote there wherever that location is.”

Votes will still be counted by precinct, but voters won’t have to physically vote in those precincts.
“We have electronic poll books and you’ll scan your license and it will tell the poll worker where you live, what ballot you’re supposed to get and you’ll vote that ballot there even though you’re at South Hancock school or wherever,” she said.

And for those who don’t want to stand in line or don’t want to wait till election day, any registered voter can vote early for any reason, from October 13 through November 2.
Voters can go to Ogle’s office in the Administration Building and vote during normal office hours during the week, or between 8 a.m. and 12 p.m. on the three Saturdays during that time-frame.

Early voting was allowed during the May primary, but Kentucky generally requires some sort of stated reason why the voter can’t turn up on election day.  In May everyone was given the same excuse: COVID-19. For this election no excuses are needed.  “We’re bypassing that this election and having no excuse early voting,” she said.

Mail-in voting, which has gotten a lot of press over worries about delays and interference, is also an option for Hancock County voters, who can request mail-in ballots from now until October 9.
“You can receive the ballot by mail and once you get it you can bring it back in and put it in our drop box that’s located out in the hallway, or you can mail it back in to us,” she said.
Mail-in ballots can also be requested by going to the official state website govoteky.com, which is also where people can register to vote, change their address and other things before the voting registration deadline of October 5.

Ballots for the election haven’t been certified and completed yet, so Ogle said they won’t be sent to voters for another couple of weeks or so.  “So if you have requested a mail-in ballot you probably won’t be receiving it till the end of September, first part of October,” she said.

Requesting a mail-in ballot means in-person voting is no longer an option.
“If you request a mail-in ballot and we have mailed you the ballot, you can’t change your mind and vote in person on election day,” she said. “You have to vote that mail-in ballot.”
And as for worries that mailed ballots will be lost, the state has implemented a bar code system to track all ballots that are requested, sent and returned. The passage of Senate Bill 2 means that voters must present a photo ID to vote, although like most everything else, it’s being softened due to the coronavirus.
The bill says that voters must provide valid form of identification, but that given certain circumstances, one of which is COVID-19, voters can sign a form affirming their identity and provide an alternate form of ID like a social security card, credit card or food stamp card.

Alternatively, if the poll worker knows the voter who has arrived without identification, that worker can sign a form vouching for their identity.

Voting with no ID at all is not really an option for a voter who’s unknown to the poll workers.
“The only way that you would be able to get a ballot if you didn’t have identification would be to get a provisional ballot,” she said.
But for a provisional ballot to count the voter must be verified, and without ID and without the worker personally knowing them, it’s a nullified vote.
“The best thing to do is if you’ve forgotten your identification and no one at the polling location that works there knows you, then go back home and get your ID and come back. That way your vote will count,” she said.
dave.hancockclarion
@gmail.com