Yager Materials truck overturns
A driver for Yager Materials suffered injury when his truck overturned on state Route 334, five miles west of Hawesville. The accident happened on July 10 at roughly 1 p.m. Hancock County Sheriff’s Deputy Aaron Emmick filed the report.
Richard M. Harris, of Fordsville, told Emmick he just left the Yager facility outside Hawesville, headed west, when he encountered a motorcycle near the centerline of the roadway. Harris said he moved to the right to give the motorcycle room, and when he did the right rear tire of the 2007 Mack dropped off the shoulder of the road, which caused the vehicle to go off the roadway and overturn. The truck slid on its side until it came to a stop facing north.
Hancock County EMS provided first aid at the scene, and later transported Harris to Owensboro Health Regional Hospital for additional treatment. He suffered injury to his arms and hands. The Mack truck sustained very severe damage. A wrecker from Bob’s Garage removed the truck.

Truck clips car
A two-vehicle accident in the Jumpin Jacks parking lot damaged a car, but caused no injuries. The accident happened on July 3 at roughly 1:45 p.m. Hancock County Sheriff Dale Bozarth filed the accident report.
Amber Boswell of Lewisport turned her 1989 Chevrolet pickup from state Route 657 into the parking lot of Jumpin Jacks in Lewisport. As she entered the lot, she encountered a 2008 Toyota Prius driven by Jason Nalley, also of Lewisport. According to Nalley, when he noticed Boswell turning from state Route 657, he moved his vehicle towards the right to give room. Boswell said when she turned into the parking lot, she also moved to the right, but the steering on her truck was stiff, and she hit the back quarter of Nalley’s Prius.
Boswell’s Chevrolet truck did not sustain damage. Nalley’s Prius sustained moderate to severe damage. Neither vehicle required a tow.

Dog causes wreck
A motorcycle rider suffered injury when a dog ran out in front of his bike, and caused him to wreck. The accident happened on July 2 at roughly 10:15 a.m. Hancock County Sheriff’s Deputy Gary Mattingly filed the accident report.
Vincent D. Wathen, of Reynolds Station, KY, was riding his 2016 Harley Davidson motorcycle north on state Route 1403, six miles south of Lewisport.  As he approached 670 state Route 1403, Wathen noticed a dog at the end of the driveway, and slowed his motorcycle. Wathen said when the motorcycle neared the dog, it lunged out of the driveway and directly into his path, and he ran over the animal, which killed it upon impact. Hitting the dog caused him to lose control of the motorcycle and start to slide. He slid into a mailbox and landscaping, which caused him to overturn, which also ejected him from the bike.
Hancock County EMS provided first aid at the scene. Later Hancock County EMS transported Wathen to Owensboro Health Regional Hospital for treatment.
A wrecker from Don’s Towing removed the motorcycle. 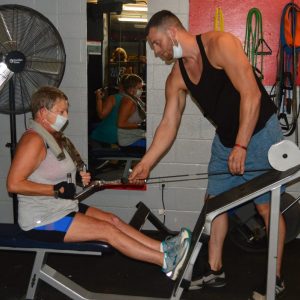