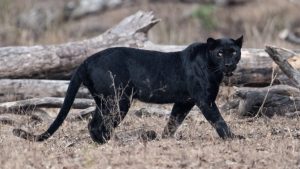 A mysterious large cat or cats roam the woods of Hancock County, and no one knows exactly what type of felines they are. Over the years, some people claim they saw a Mountain Lion, while others claim they saw a black panther. Is it possible for either animal to exist in Hancock County? Before broaching this particular subject, a discussion of sightings needs to be made.

The latest installment of a sighting happened Saturday morning at Evelyn Martenet’s house in the Horsley Hill area below Hawesville on state Route 69. The incident happened before noon, just after a repairman finished working on an appliance at her home. Martenet said the repairman was standing on her porch writing her a receipt, and she was writing him a check. She looked up, and spotted the animal in a field across from her house.

“It was walking along,” Martenet said. “It stopped a few times and then it kind of loped and then at the end it stretched out and ran.”

“Its body was as long as a Great Dane, of course it was not as tall,” Martenet said. “It was very sleek. It was a slinky, sleek looking thing.”

What type of cat did Martenet see? The Clarion called the Kentucky Department of Fish and Wildlife to find out. John Hast, the department’s Bear and Furbearer Program Coordinator, discussed the sighting. He immediately shot down the idea of the animal actually being a black panther.

“We do not have any black feline species in Kentucky,” hast said. “A black panther is a South American, Amazonian Jungle kind of deal.”

In addition, the climate of Kentucky, specifically the winters, does not allow black panthers to survive here.

Is it possible Martenet spotted a wandering Cougar? Though the closest breeding area for Mountain Lions exists 900 miles away, it is not uncommon for young males to branch out and travel long distances. In fact in 2014 a Cougar from South Dakota was killed on a freeway in Connecticut, and that same year a Kentucky Fish and Wildlife officer shot and killed a young Cougar in Bourbon County. It must be noted these are wandering animals, and do not represent an established Mountain Lion colony in Kentucky. As a breeding population, Cougars are considered extinct in the state. For her part, Martenet insists she did not see a Mountain Lion, but a black panther.

“I think a Cougar has a different shape,” Martenet said. “I think of a Cougar as being tawny colored and muscular with bulging muscles. This was a sleek, black cat.”

Is it possible Martenet simply spotted a dark colored Bobcat? She says no.

“It wasn’t a Bobcat, they are much smaller than this was,” Martenet said. “The shapes are so different too. A Bobcat really does look like an oversized house cat.”

Hast tends to agree with Martenet. He said Bobcats simply are not black.

“It is really rare to have a completely black Bobcat,” Hast said. “I am not sure if there has ever been one recorded.”

Hast said in his experience, most of these Black Panther sightings tend to just be extremely large house cats. He said distance, and viewing one on a sloped hill, tend to alter the perception of the size of the animal.

“We had one in Louisville that was a large cat,” Hast said. “But it was clearly domesticated.”

Martenet sticks by her description of the animal as being the length of a Great Dane, solid black in color with a long tail.

Her report of a large cat is not the only one in the county in the past few months. Martenet told the Clarion of a sighting by another resident of Hancock County. She said the grand daughters of Sandy and Donnie Young also saw a large cat.

Mrs. Young said her granddaughters’ sighting happened in the fall. She said the granddaughters, Emily and Kaitlyn Raley, were walking on B. Rice Road by property owned by Jimmy Newton when they spotted something they at first mistook for a deer due to its coloration. When the animal turned, the granddaughters saw the “deer” had a very long tail, and quickly realized they were not looking at a deer.

“They did not go walking after that,” Mrs. Young said.

Reports of people spotting large cats in the area go back many years. The most recent outbreak, not counting the above mentioned sightings, date back to 2014.

In September of 2014 Marie Freeny called into the Clarion concerning a large cat she encountered at her residence one night. According to the story, around 9 p.m. on the night of September 11, 2014 Freeny let her little Yorkie Jodi out to use the restroom. Freeny said Jodi went only a few feet out into the yard before turning around in a panic and bolting back to the house. Freeny said the dog was terrified. She stepped out to see what scared her dog, and spotted a set of glowing eyes about 20 feet away.

Freeny said several different powerful lights illuminated her back yard. When she saw the glowing eyes, Freeny said she thought it was a coyote, and yelled and stomped her feet to scare it away. Instead, the animal moved toward her, and into the light. What stepped into the light scared her. She said it definitely was a Cougar, not a Bobcat. It was long and slender, and had a long tail. Freeny said she darted into the house and grabbed her shotgun.

When she came back out, the Cougar was still there. Fearing to shoot the gun due to a neighbor’s horses in the field by the house, Freeny simply chambered a round into the gun. When she chambered the round, the Cougar slowly turned and walked away. Freeny said she firmly believes the Cougar planned to have her Yorkie Jodi, or her, as a meal.

In October of 2014 Steve and Kathy Woodward contacted the Clarion about something killing sheep on their 12-acre farm on Hawesville-Easton Road in southern Hancock County. The Woodwards said starting in 2012 something started attacking and killing their sheep. In two years the Woodwards said they lost approximately 40 sheep to some type of large feline animal. They erected a five-foot tall fence around their property, and this animal managed to kill and drag a full-grown sheep up and over the fence. In addition, sometimes the Woodwards would find some of their sheep with deep claw marks on their hindquarters, sometimes deep enough to cause the sheep to die.

At that time they owned a Great Pyrenees, a herding dog. Though bred to protect livestock, the Woodwards said whatever type of cat this was, the dog wanted no part of it, and refused to challenge the cat, or go anywhere near it.

For his part, Steve Woodward said he encountered the cat one day, and it definitely was not a Bobcat. While working in the woods on his property one afternoon, the cat charged him. It was about three in the afternoon, so he was able to see the animal clearly. He said the cat ran towards him, stopped and growled, scratched the dirt and ran about 50 feet away. He said the cat charged him three times, but never actually attacked him. He said it was definitely a Mountain Lion.