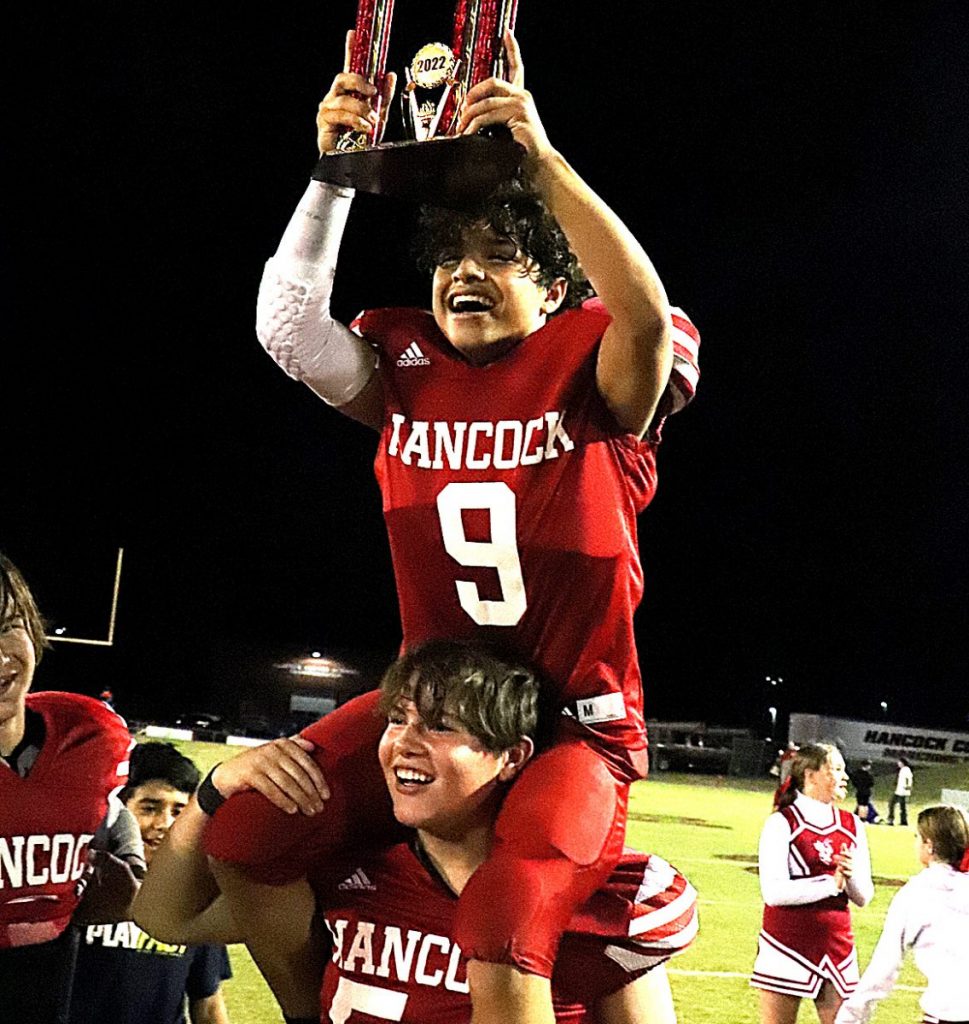 “I knew, if we had he ball, we were going to score quite a few points,” coach Kessans said.

“I’m really proud of this team. They’re such a good unit, they play together and they’re unselfish. Everyone just tries to do their job and no one blames anyone.”

Butler County received the opening kickoff and began a long drive that took up nearly the entire first quarter. The Hornet defense put a stop to the drive and the Bears turned the ball over on downs.

The HCMS offense took very little time to impose its will as the team scored on every possession in the first half. The first touchdown was a 6-yard TD run by quarterback Kyle Anderson. Yanez collected the 2-point conversion and the score was 8-0 early in the second quarter.

Hancock County got the ball back minutes later after the defense did its job.

Brady Eubanks had to leave the field for a play after a Butler County player ripped off his helmet and appeared to have hit him in the head with it. Eubanks was fuming mad on the sidelines.

Moments later Yanez took a pitch running left and quickly saw daylight. The 8th grade speedster raced up the visitor’s sidelines so fast he made defenders look as if they were running in quicksand. It was a 70-yard TD run for Yanez and Eubanks then returned to the field and crashed through the line for a successful conversion.

The Hornets got the ball back for a third time with just seconds remaining in the half, but coach Kessans was not content with his team’s 16-0 lead.

Kessans called for one more play and Yanez took it to the house. This time he ran 42 yards to the end zone and the Hornets led 22-0 at intermission.

“Going into this year I was talking to the assistant coaches and thought… if we can get five guys on the line that want to block we’re going to be real good,” Kessans recalled.

“I knew we weren’t going to be bigger than most teams, but we are gritty and smart,” the coach said.

The Hornets are 10-0 but put their unbeaten record on the line for a game against Owensboro Catholic Middle School. The game was canceled in the third quarter due to a transformer fire.

Eubanks scampered 52 yards to paydirt in the third quarter before Graham Shearn scored on a 5-yard TD run in the fourth.

The teams shook hands and the Hornets celebrated with the GRVC trophy.

Eubanks led the Hornet defense with 11 tackles, four assists and one sack. Mucker had nine total tackles, Landon Hendricks had five, Shearn three, Camdon Garrison had two and a fumble recovery, Brayden Roberts, Quaid Estes, Ashton Vogt, Anderson and Yanez all had two tackles each, Ian Rust, Blake Haycraft, Keegan French and Nolan Ashworth all had one each, and Tyce Boling made a interception.