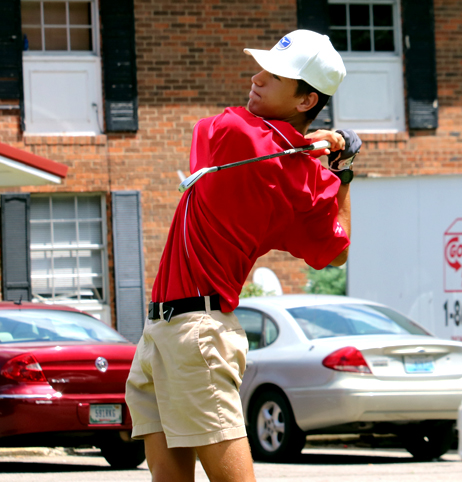 Dec Lewko fired a 1-under par 71 to lead Hancock County in the annual Schoolboy Classic golf tournament held at Windward Heights Country Club Saturday. Bowling Green won the team title with a total score of 191. The Hornets placed sixth at 329.

“This is the best team score that we’ve entered in several years,” HCHS coach Dave Cowden said.
Lewko got off to a solid start with a birdie on hole #2. The sophomore made another birdie to shoot 36 on the front nine then came in with a 35 from the blue tees. The left-hander finished with four birdies on the day.

“Dec played a nice round. It helps to be on the green in regulation and he did hit 11 greens,” the coach said.
Conner Napier was next for HCHS with a 79. He made three birdies while shooting scores of 39-40=79. Max Gray shot 44-44=88. The senior’s highlight of the day came on #11 when he holed a pitch shot from about 40 feet. Jacob Shultz rounded out the varsity team score with a 46-45=91, that included one birdie.

Following Bowling Green in the team competition was Ohio County (309), Madisonville (315), Daviess County (321), Henderson County (327) and Hancock County. Sixteen teams with a total of 83 players competed.
“One can tell that we had a fairly representative tourney by noticing that there were three teams who scored 315 or better. Bowling Green’s 291 (3-over par) is a record score for the event,” Cowden said.
Bowling Green coach Adam Whitt is the son of Hancock County’s own Jana Mefford, daughter of coach Denzil Mefford.

The Hornets placed ninth during the Owensboro Catholic Invitational Monday. The tournament was held at the Pearl Club at the Summit.
“The course was set up nicely and very challenging – but what’s the use in playing golf if one has no challenge,” Dave Cowden said. “It is the only game that is hard to master that is played with a stick and a ball. You’re not playing just another person but against a golf course.”
Conner Napier led HCHS with a solid round of 82 on the difficult layout. His nine scores were 40 and 42. Dec Lewko shot 44-40=84, Max Gray made one birdie on his way to rounds of 46-40=86, and Kolby Keown shot 44-46=90, with one birdie. Ethan Heavrin shot 50-48=98.
Bowling Green High School won with a team score of 301. The Purples Reed Richey was individual medalist with a 69.
“At The Pearl, that was a feat,” Cowden said of Richey’s score.