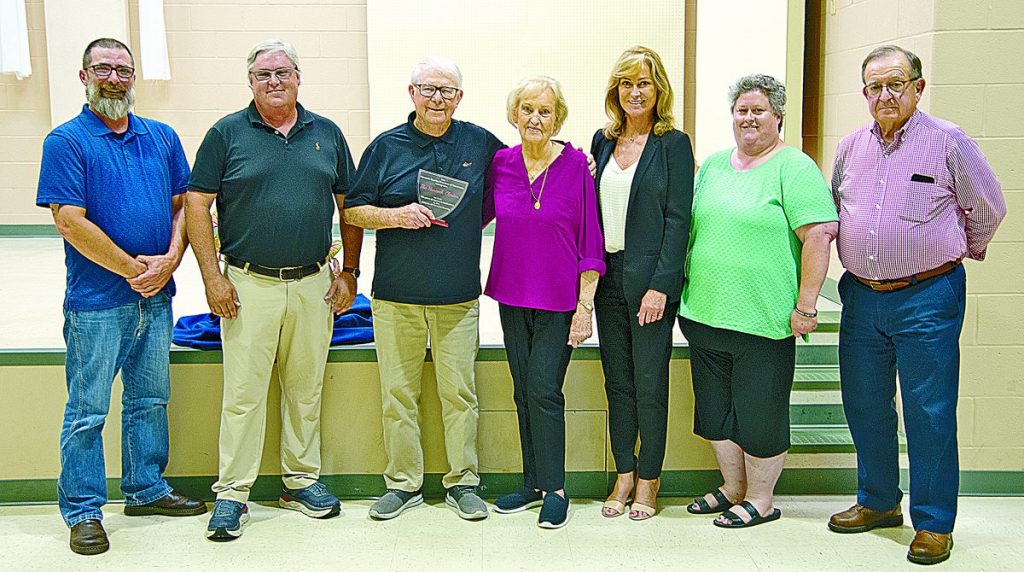 The Hancock Clarion was honored Monday evening with a special award for the newspaper’s contributions to the well-being of the Hancock County community over the years.

The award was accepted by Publisher/Editor Donn Wimmer, and the Wimmer family.

“Right at the top of our front page, it says ‘The Voice of The People of Hancock County for 129 Years,’” Wimmer said. “There have been other papers in Hancock County, but The Clarion is still here. It has not always been easy to make it, but we have made it and hope to keep going for a long time to come.”

The award was presented by Chamber President Chelsea Boling, who is Wimmer’s grandniece.

Wimmer’s grandfather, Roscoe I. Downs purchased the newspaper in late 1945, and Donn came to work for Downs as a printer at the age of 14. Downs sold the paper in the early 1950s, but Wimmer stayed on for a few years before moving west to New Mexico with wife Juanita.

Donn, with Downs and Donn’s mother, Bernice, bought the paper for a second time in 1956, and Donn and Juanita returned to Hancock County, with Wimmer going to work for his mother and grandfather.

Bernice was well-known in the community, and was the go-to person for knowing what was going on in Hancock County. Wimmer bought the paper outright in the early 1970s with Bernice’s help, and Juanita was a vital part of the paper’s operation for several decades.

The staff is rounded out by Dave Taylor as news editor, C. Josh Givens as reporter, and Lorri Oliver as graphic designer.

Donn has also lended his expertise in other areas in the community, helping to organize the Industrial Foundation, serving on the Chamber Board, as well as volunteering with the Boy Scouts of America. He remains in close contact with several of his former troop Scouts.

Though he is now retired from flying, Donn has more than 4,000 hours as a pilot, and documented much of the industrialization of Hancock County with aerial photographs of manufacturing facilities as they were being constructed. He was chairman of the Hancock County Airport Board when the new airport opened in 2008.

The Hancock Clarion is published each week on Thursdays. Offices are located at 230 Main Street in Hawesville.