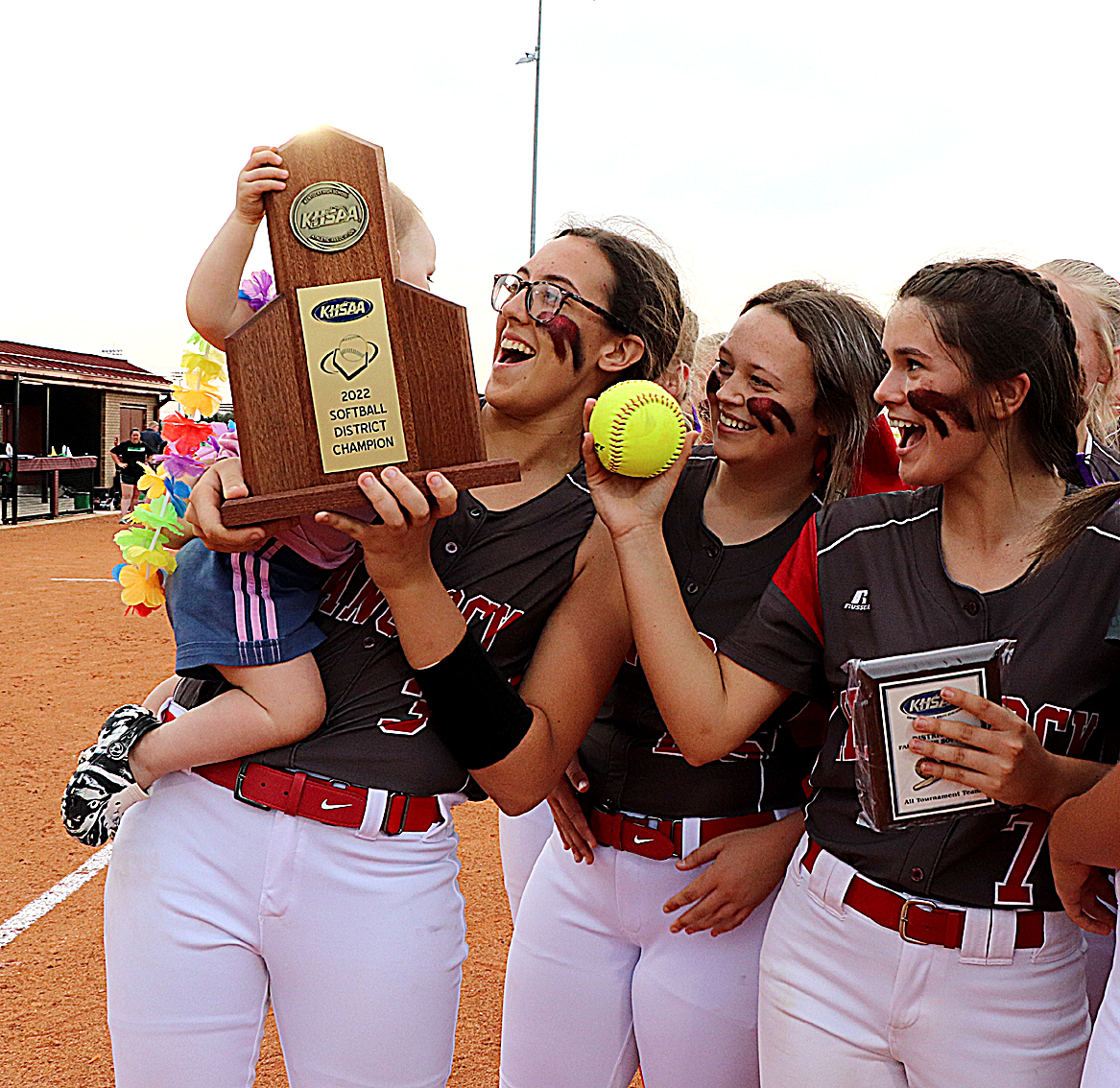 The Lady Hornets led from start to finish during a hotly contested 11th District final at Breckinridge County High School Tuesday. Hancock County defeated Meade County 4-1 to win the championship for the second year in a row.

“They got us twice this year so I knew it was going to be a game, but Lily (Roberts) pitched great and our defense was awesome,” HCHS coach Dwayne Wroe said. “Brooke Toler made a great running catch in left-center on the first hit of the game and that set the tone.”

Ella Staples got the first hit of the game and Ella House knocked in the first run to give the Lady Hornets a 1-0 first inning lead.

Meade County’s Annabelle Knoop hit a double in the first frame but Lady Hornet pitcher Lily Roberts struck out the next batter to end the threat. The Lady waves went down 1-2-3 over the following four innings and the score remained the same.

Layni Roberts drew a two out walk in the sixth and Halle Coomes came up big for the Lady Hornets. The senior smacked a double and Roberts scored from first on the play, giving Hancock County a 2-0 advantage that would prove pivotal.

Meade County had two outs in the home half of the sixth when Rylee Webb hit a bomb over the fence in right-center field for a solo home run. Lily Roberts ended the inning when she set down the next batter on strikes, but the lead was cut to one.

Baylee Estes and Kylie Westerfield both bunted for base hits to lead off the top of the seventh as Hancock County wanted some insurance. They got it when Lily Roberts hit a double off the fence to score Estes. The score jumped to 4-1 moments later when Adi Hurst  hit a sacrifice fly that brought home Westerfield.

“Halle came up with a big hit in the sixth and Adi hit one on the nose to give us some separation. Both of my seniors came up big in their final (district) championship game,” Wroe said.

The Lady Waves went down in order in the seventh and the Lady Hornets celebrated the sweet victory.

“I couldn’t be more proud of all the girls,” Wroe said. “We’re still young in spots and we played error free softball. That’s what you have to do in big games.

“We’ve had a great year and we still have some business we’d like to take care of in the region tournament.”

Roberts was the winning pitcher. She allowed one run on two hits, with 10 Ks and no walks over seven innings.

“When you have Lily on the mound and you can get three or four runs I like my chances,” the coach said.

Callie Wiles was the losing pitcher.

Lily Roberts pitched her way out of a bases loaded jam in the last inning and Hancock County defeated Breckinridge County 2-0 in an opening round game of the Girls 11th District Softball Tournament at BCHS Monday.

The Lady Hornets went ahead in the first inning when Baylee Estes lead off with a triple. Kylie Westerfield knocked in the run and the girls led 1-0.

Hancock County scored an insurance run in the fourth. Lily Roberts single with one out and Gracie Gaynor entered the game as a courtesy runner. Three batters later Layni Roberts smacked an RBI hit and the lead grew to 2-0.

The Lady Tigers offense went down quietly throughout much of the contest, but they had a runner on when Brooke Toler made a great catch near the outfield fence to save a run in the sixth. Breck County made things very interesting in the seventh when they connected for three consecutive singles to load the bases.

Lily Roberts then struck out the side to secure the win and allow the girls a berth in the upcoming regional tournament.

Roberts allowed no runs on five hits, with 11 Ks and one walk over seven innings.

Ashlyn White was the losing pitcher for BCHS.

White had two hits for the Breck County offense.

Lily Roberts tossed a 1-hitter and Ella Staples drove in the runs during a 3-1 win for the Lady Hornets over Heritage Hills (Indiana) Saturday in Owensboro. The game was part of the “Team Lauren” Cancer Awareness Tournament hosted by the Daviess County High School Lady Panthers.

Hancock County took the lead in the first inning when Staples knocked in two runs with a single to left field. Baylee Estes and Kylie Westerfield scored on the play. The Patriots countered with one run in the home half of the same frame.

Westerfield led off the third with a base hit and quickly stole second base. Staples then knocked her home with a double to left field and the score was 3-1.

Roberts and the HCHS defense held Heritage Hills at bay the rest of the way.

Roberts earned the win on the mound by allowing one run on one hit, with five Ks and one walk over seven innings pitched.

Staples was 2 for 3 at the plate with a double and three RBI. Westerfield was 2 for 4 with two runs scored. Ella House was 1 for 3 and Roberts was 1 for 4. Estes was 0 for 2 with a run scored. Estes, Westerfield, House, Brooke Toler and Gracie Gaynor all had one stolen base each.

Adi Hurst put Hancock County ahead with a 3-run home run in the sixth inning before Warren East came back to win 4-3 during the softball tournament at Owensboro Friday.

Madison Hymer tripled and scored in the first inning and the Lady Raiders held a 1-0 lead until the sixth.

There were two outs when Roberts and House both singled to give Hurst a chance in the home half of the sixth. The senior connected on the first pitch and sent the ball sailing over the fence in left field for the 3-run homer.

The Lady Hornets got a runner into scoring position in the seventh, but Estes was left stranded at second base.

Hymer ended the game in the bottom of the seventh with a walk-off home run.

Roberts took the loss on the mound. She allowed four runs on eight hits, with seven Ks and one walk in 6.1 innings of work.

Emma Markham got the win while striking out 11.