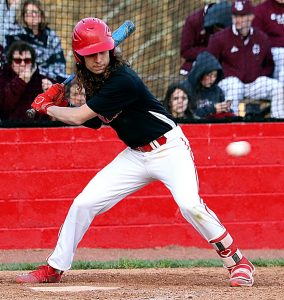 Austin Volocko smacked a home run and the Hornets banged out 10 hits during a 13-2 win over Grayson County at Leitchfield Friday.

“This was a good game and our bats really came alive. We only had one guy who didn’t have a hit and he hit the ball hard, too,” HCHS coach Brad Keown said.

Hancock County (13-8) grabbed a 2-0 lead in the first inning when Volocko scored on a defensive error and Ryan Jones came home on a hit by Jack Duncan. The Cougars tied the score with two runs in the bottom of the first.

The Hornets took a 4-2 lead in the second as Dec Lewko trotted home on a bases loaded walk and Volocko scored on a fielder’s choice. Hancock County added runs in the third and fourth frames before Volocko belted a 2-run shot in the fifth to make the score 8-2.

“He’s (Volocko) definitely seeing the ball a lot better than he was. He’s actually been hitting the ball hard all year, just hadn’t been able to get balls to drop. He’s locked in and getting pitches that he can drive,” the coach said.

Hunter Severs, Kaleb Keown and Duncan all doubled during a five run seventh inning for HCHS.

Hornets skipper Brad Keown has been busy adjusting his lineup throughout the season, but even more now after the injury to catcher Drew Lyday.

“We’ve had a few different players in since Drew got  hurt and that’s made it a little more difficult to finalize the lineup. They all bring something a little bit different, but it’s definitely given us some options and guys have stepped up and started filling the void.”

Volocko led off the home half of the first with a home run to give Hancock County a 1-0 lead. The score remained the same until the fifth inning.

Hamilton led off the fifth with a base hit and Andrew Boutcher reached on an error. They both crossed home plate on defensive errors before Keown doubled to score Volocko. The boys added two more in the sixth when Jake Frames singled and scored and Sam Walz walked and scored on a sacrifice fly by Severs.

Walz earned the win. He allowed no runs on four hits, with eight Ks and no walks over seven complete innings.

Henderson County took a 4-0 lead in the second inning and went on to win 11-1 over the Hornets Tuesday at Henderson.

The Colonels led 9-0 through five frames before the Hornets put a run on the scoreboard.

Kaleb Keown drew a base on balls and Ryan Jones followed with a base hit. Keown advanced to third on an error then scored on an RBI ground out by Luke Brown.

Henderson plated two more runs in the sixth to end the game via run rule.

Jones and Jack Duncan were both 1 for 3 at the plate. Duncan stroked a double. Brown had the lone RBI.