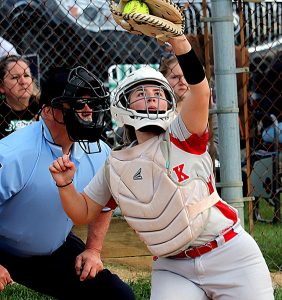 Ella Staples hit two home runs and Adi Hurst and Lily Roberts hit one each to lead Hancock County to a 12-0 win over Breckinridge County at Hardinsburg Monday.

“Our hitting finally came around in this one. We’ve kind of been in a slump the past two or three weeks and man we busted out of it big time, HCHS coach Dwayne Wroe said.

The Lady Hornets (18-3) got the party started early when Staples belted a 2-run homer in the first inning. Roberts kept the celebration going when she followed with a solo home run, and two batters later Hurst connected for a long home run to give the girls a 4-0 lead.

Kylie Westerfield and Staples both scored on bases loaded walks in the third frame and Lady Tiger pitcher Ashlyn White was chased from the mound.

Hancock plated three runs in the sixth on hits by Westerfield, Staples and Ella House. The final three runs came in the seventh when Staples smashed her second home run of the night, a 3-run shot that put the icing on the cake.

“We seemed like we were more focused and selective at the plate and we were able to barrel some balls up square. I thinks we had 15 hits all the way up and down the lineup. We got production out of a lot of different people and that’s good to see,” the coach said.

Roberts pitched a shutout to earn the win on the hill. She allowed no runs on two hits, with 10 Ks and one walk over seven innings.

“Lily’s been real good for us all year long. We feel like if we can put some runs on the board we going to be in every game,” Wroe said.

Ella House knocked in four runs and Lily Roberts struck out 15 batters during a convincing, 9-1 win for the Lady Hornets over the Lady Commodores Thursday. The game was played at Perry Central High School in Indiana.

Baylee Estes led off the game with a triple and she quickly scored when House  connected for a base hit. Hancock County plated three more runs in the third.

Brooke Toler drew a base on balls and Estes followed with a double to put runners at first and third. Toler scored on a defensive error and Ella Staples ripped an RBI single and Roberts did the same to give the Lady Hornets a 4-0 advantage.

Staples knocked in Estes in the fifth and the freshman scored for the fourth time in the sixth on a hit by House. Staples and Adi Hurst both singled and scored in the seventh. Perry Central’s lone run came in the third.

Roberts picked up the win on the mound. She allowed one run on five hits, with 15 Ks and no walks over seven complete innings.