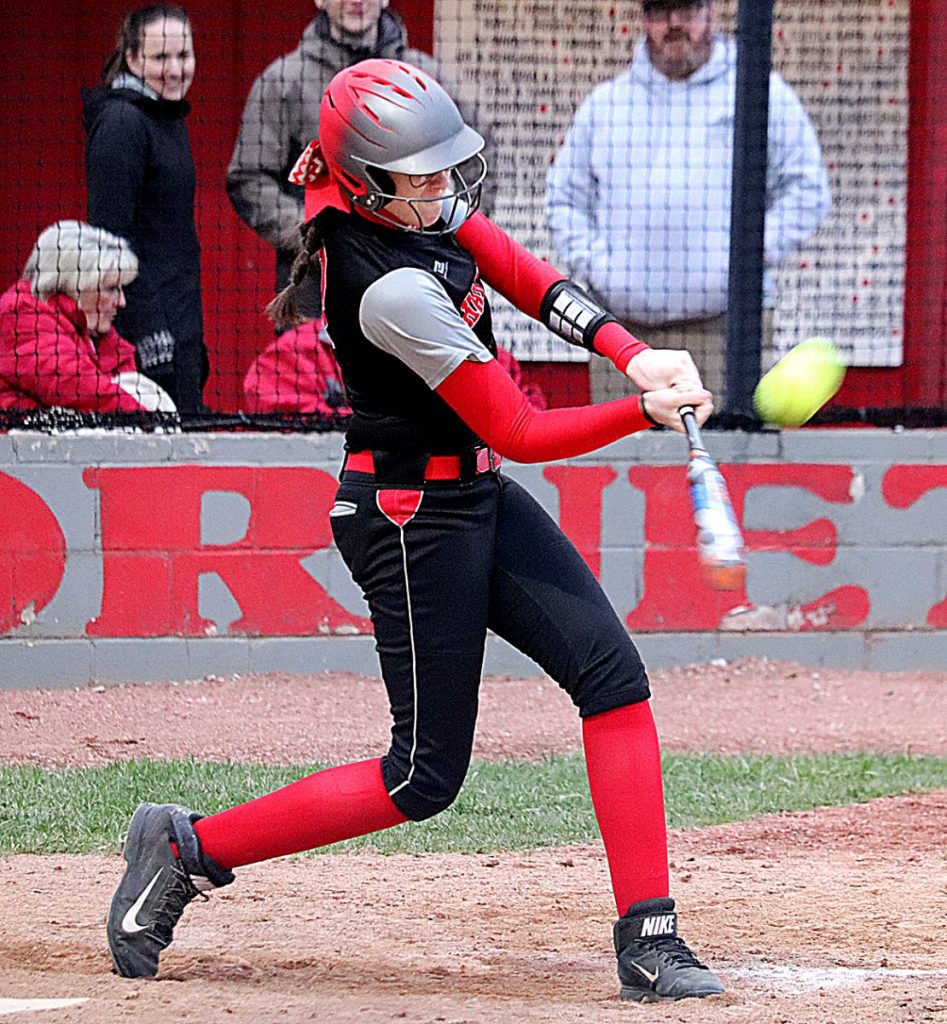 Adi Hurst belted a home run and Lily Roberts pitched a shutout to lead the Lady Hornets to a 1-0 win over Breckinridge County in a district game at Vastwood Park on April 20.

Hurst came to the plate with one out in the bottom of the second inning. The senior connected on an 0-2 pitch and sent the ball sailing over the fence in center field for a sole home run. That ended up being all Hancock County would need.

Pitcher Lily Roberts and the Lady Hornet defense did a job on the Lady Tiger offense. Breck County did not advance a base runner into scoring position until the sixth inning, when Chloe Patterson walked and moved to second on a hit by Morgan Tabor. The next batter popped up to short stop and Baylee Estes made the catch to end the threat.

The Lady Hornet offense advanced runners into scoring position during every frame except for one, but girls were left stranded. That made Hurst’s homer all the more important in securing the district win.

Roberts (16-2) got another win on the mound while pitching a gem. She allowed no runs on two hits, with 11 Ks and three walks over seven innings. She is currently third in the state with 208 strike outs on the season.

Ashlyn White took the loss for Breck. She allowed one run on four hits, with eight Ks and three walks.

Hurst was 1 for 3 with the homer and one RBI. Ella House was 1 for 2, and Roberts and Estes were both 1 for 3. House stole two bases while Estes stole one.

Rylee Webb hit a walk off home run in the bottom of the seventh inning to lift Meade County to a 3-2 win over Hancock County during a district softball game at Brandenburg Tuesday.

The Lady Hornets (16-3) led 2-0 when Ella Staples and Lily Roberts hit back-to-back home runs in the first inning. Hancock County had chances to score throughout but could not push another run across the plate.

The Lady Waves (8-9) pulled to within one run when they scored in the fourth, but Roberts and the Lady Hornet defense held the Meade offense at bay until the last frame.

Roberts struck out the first batter in the seventh then Gracie McCoy hit a single to set up Webb’s heroics.

Hancock will get a second chance to beat Meade when the two teams meet at Vastwood Park on May 12.

Roberts took the loss on the mound. She allowed three runs on four hits, with eight Ks and two walks over seven innings.

Callie Wiles was the winning pitcher for Meade County.