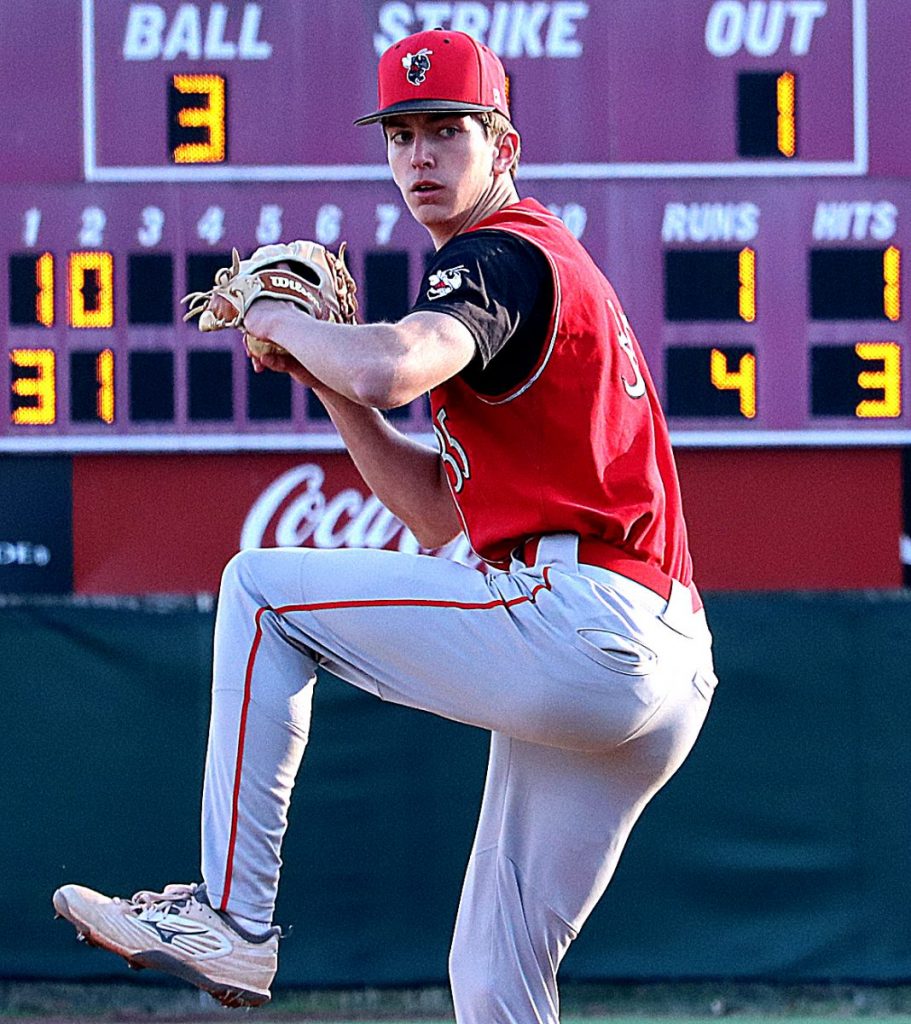 In game 2 the Hornets allowed zero hits during a 4-1 win for HCHS over the Tigers. Jordan Payne and Logan Willis pitched a combined no-hitter.

Breck County took a 1-0 lead in the first inning when Hornets starting pitcher Payne walked three batters and was charged with a wild pitch that allowed Cohl Proctor to score from third base.

That was about it for the Tigers as Payne settled in and shut down the Tiger offense.

Hancock County got rolling quickly when Austin Volocko led off the bottom of the first with a double. He later scored on a wild pitch and Kaleb Keown singled and scored on a passed ball to give the Hornets a 2-1 lead.

Payne set down Tiger batters in order over the following three innings. He struck out the side in the fourth and got the third out in the fifth on a pop up to Willis at third base. Payne got an out in the sixth but his pitch count had reached 113 and coach Brad Keown went to a fresh arm.

Willis took the mound and kept the no-hitter going.

The Hornets added two insurance runs in the sixth. Colin Johnson led off with a base hit after entering the game for Keown, who had jammed his knee earlier in the contest. Ryan Jones drew a base on balls and Johnson later scored on a defensive error before Willis ripped an RBI double that gave HCHS a 4-1 advantage.

Willis then stuck out the side in the seventh to end the game.

Payne got the win on the mound. The sophomore allowed one run on no hits, with nine Ks and six walks over 5.1 innings. Willis, a junior, allowed no runs on no hits, with four Ks and one walk over 1.2 frames.

Proctor was the losing pitcher for Breck County.

Johnson and Keown both went 1 for 1 at the plate. Volocko was 1 for 2 with a double and Jack Duncan was 1 for 2. Willis was 1 for 3 with the RBI double.

Keown had two stolen bases before leaving the game with a jammed knee. Volocko stole one base.

The first game of the double dip did not go Hancock County’s way. Breck won 9-0.

The Tigers scored two runs in the third inning, two in the fifth and five in the sixth. The Hornets had a runner in scoring position in the fourth, sixth and seventh frames but could not convert.

The Hornets had some vary bad luck when catcher Drew Lyday was hit by a pitch and had to leave the game. The junior suffered a fractured hand and is out for the season.

Isaac Seeger struck out 15 while getting the win for Breck County.

Volocko got the only base hit for Hancock County. He went 1 for 3 at the plate. Aiden Taylor had two stolen bases. Volocko had one.

The Apollo Eagles took a 3-0 decision over the Hornets during a varsity game at Vastwood Park Tuesday.

Apollo plated two runs in the second inning and the score remained 2-0 until the seventh, when they added an insurance run.

The Hornets got base runners into scoring position in the third and sixth innings but could not convert.

Brock Tindle took the loss on the mound. He allowed two runs (one earned) on four hits, with four Ks and four walks over six innings. Ryan Ogle pitched the final inning. He allowed one run on one hit, with one K and three walks.

Tyler Payne was the winning pitcher for Apollo.

Andrew Boutcher was 1 for 2 at the plate for HCHS. Austin Volocko and Jack Duncan both went 1 for 3.