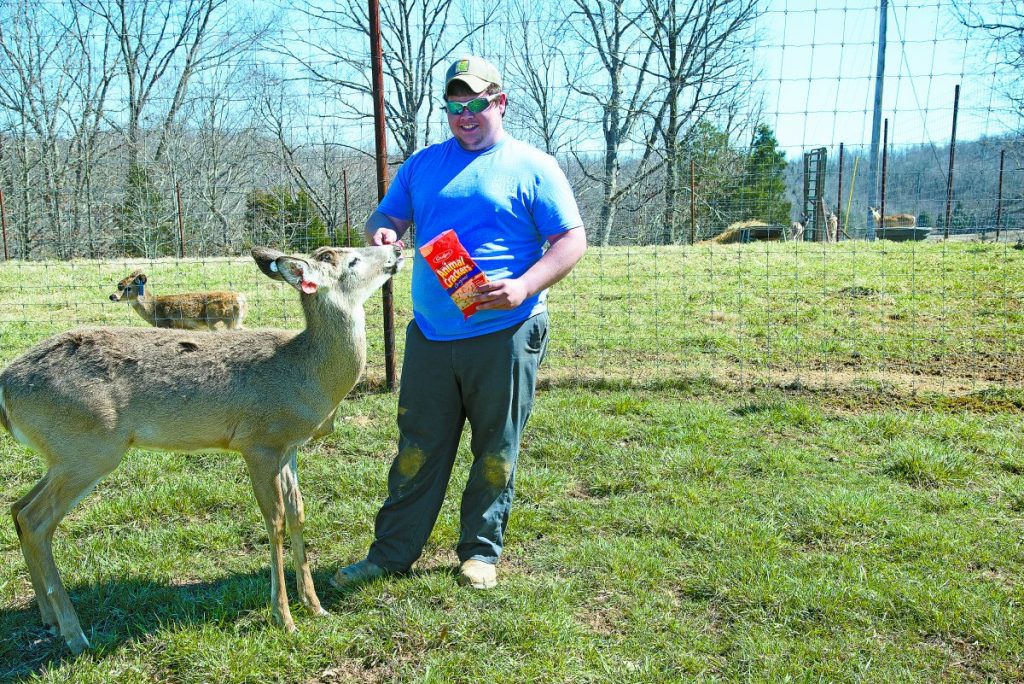 Tyler Helson, 22, treats a two-year-old buck to an animal cracker at his BlueMoon Whitetails farm in Reynolds Station. Helson bottle fed the deer after its mother died attempting to deliver a twin fawn. “He’s my buddy, and will probably never leave the herd.”

Tyler Helson was watching an outdoor channel his senior year of high school when he saw a documentary which fit right into his thoughts about his future after graduation.

The show was about deer farming, and Tyler knew right away he had found what he had been searching for – a business venture which would combine his passions of agriculture and hunting.

“I have been around farm equipment since I was three years old, and had worked on farms all through high school,” Helson said. “Deer farming was very interesting to me because I saw a way to be in agriculture and have livestock, without the huge expense of running cattle.”

KDFWR oversees fencing and facilities inspection, including assuring prohibited cervid species are not within herds. KDA officials are responsible for overseeing the health, vaccination and transportation of animals.

As well, both agencies closely monitor both domestic and wild deer in the state for signs of chronic wasting disease, a fatal neurological disease first discovered in the 1960s in the western United States. Six of the seven states bordering Kentucky have found the disease in wild deer populations, though it has not been detected in the Commonwealth.

While still in high school, Helson began researching the requirements and needs for farming deer in Kentucky, acquiring fencing and equipment long before the first deer arrived at the family’s Reynolds Station farm.

Fence requirements are well laid out in KDFWR administrative regulations, down to specifications for corner posts, post depth and the type of wire to be used. Fences are required to be at least eight feet tall, well above the height a deer can clear in a jump.

Helson will enter his third fawning season come May. He said the key for any potential deer farmer is to not “jump right in.”

“I didn’t really make money on the farm until the third year,” Helson said. “All of my deer are papered, and I can trace the genetics of every one in my herd.”

He currently has 23 head in his BlueMoon Whitetails herd, which are kept in sectioned pens on five acres. Six of his does the first year delivered twin fawns. “Right away, I was covered up in deer,” Helson said. “It was very exciting to start seeing results. I sold several buck fawns and lower-genetic does, and it really felt like I was on my way.”

While Helson sells his deer to hunting preserves and other farmers, there is also a market in America for venison as the lean meat grows in popularity.

“I’m focused on raising the big bucks, which can sell for several thousand dollars,” Helson said. “Deer can be more profitable than traditional livestock because they don’t need the huge plots for grazing, but they can be challenging because disease can wipe out a herd real quick.”

Vaccinations are closely monitored, and many of the medications Helson uses are those marketed for goats and pigs. Helson said there are whitetail deer medications on the market, but they are typically much more expensive than those commonly available.

While he maintains breeder bucks in his herd, Helson plans to use artificial insemination in the future, buying his genetic materials – or straws – from top producers in the field.

“What you are going for in deer farming is a deer that has stacked genetics,” he said. “If you can show a customer a deer with a great pedigree, you are going to get a better price. The hunting preserves want those big racks with strong genetics. You deliver that, they are going to keep coming back as loyal customers.” 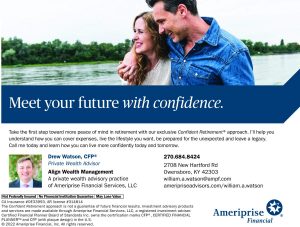 One breeder buck in Helson’s herd, UpperClass, scored 204 4/8 on the Boone & Crockett scale at just two years old. “If you are raising deer that score like that on a consistent basis, interest in your herd is going to grow,” Helson said.

The 22-year-old farmer said he has plans to soon expand his operations by fencing in 46 acres of family property just down the road from his home.

“I love deer farming,” Helson said. “They are really sweet and fun animals, and every day there is something different going on with them. They are much easier to handle than cattle, and it’s a growing market. I am looking forward to continuing to grow my herd.”