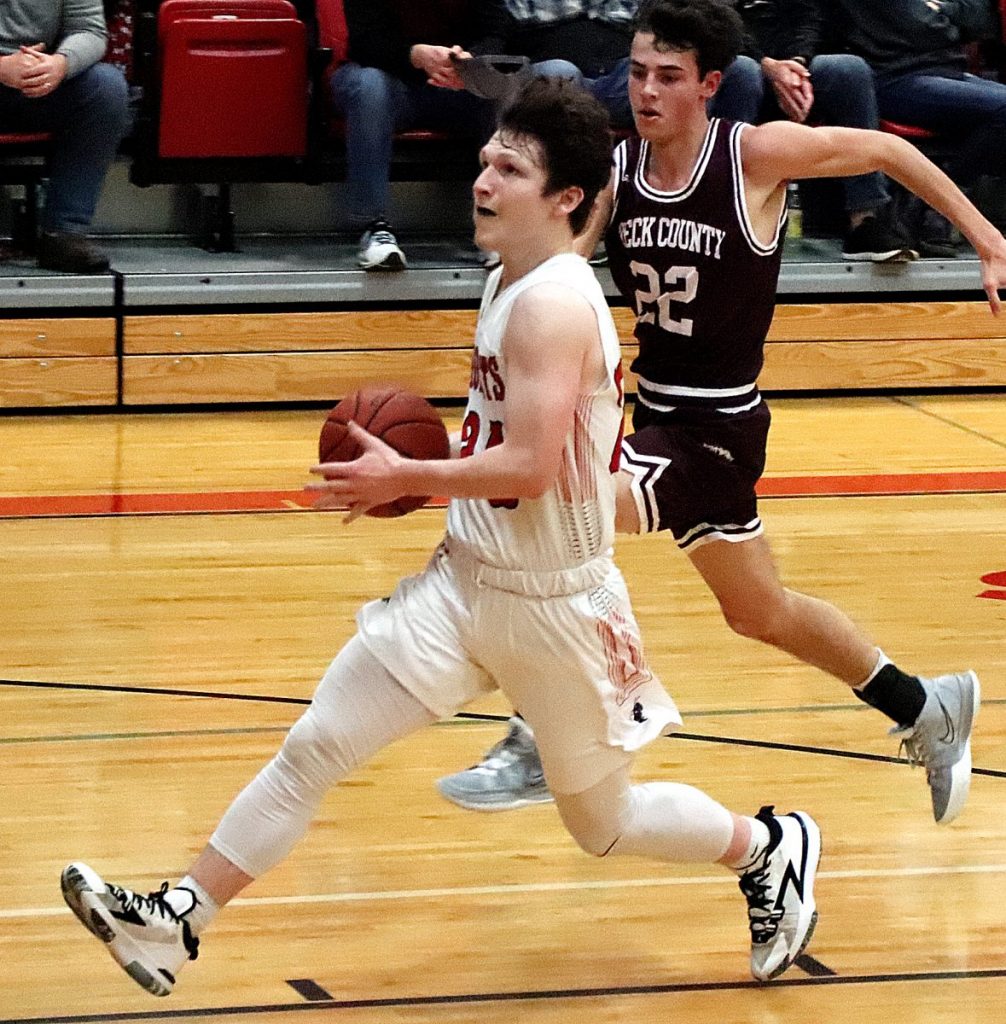 The varsity Hornets won their third game in a row when they knocked off Henderson County 48-47 at HCHS Monday.

Evan Ferry hit a “3” to open the scoring and the Hornets won the first quarter 11-4. Devyn Powers and Ryan Ogle made two baskets each in the second and Hancock County continued to play strong defensively. The Hornets increased the advantage to nine points, leading 23-12 at halftime.

Ogle scored five points, including a conventional 3-point play and Powers hit from beyond the arc in the third. Kaleb Keown chipped in three points and Ferry made two from the stripe during the frame, but the Colonels turned it around on the offensive end.

Henderson County canned two 3’s and won the third period 18-13. They continued to battle back in the fourth and Zander Wilson splashed two corner 3’s to pull the Colonels even with the Hornets at 36-36.

Powers answered quickly by making a “3” that gave the lead back to HCHS. Henderson came right back with another bomb, but Ferry scored the put the Hornets ahead 41-39.

The Colonels then went on a 4-0 run for their first lead of the game with under three minutes remaining on the clock.

A much needed “3” went in for Keown and Hancock County regained a one point lead at the 1:20 mark. The teams went back-and-forth before Ogle scored the go-ahead basket in the lane with seven seconds on the clock. Henderson got a shot off but it rolled harmlessly off the rim and the Hornets celebrated the victory.

Henderson County had one free throw attempt for the game. They missed it.

The Hornets won every quarter of play during a 54-40 win over Breck County at HCHS Friday.

Powers canned two 3’s and every Hornet starter scored during an 18-15 first quarter win for HCHS. Keown carried the offense in the second and he and Ferry both hit from downtown to give Hancock County a 29-24 halftime advantage.

Ogle, Powers and Keown all connected from “3” in the third as the Hornets continued to build the lead. Breck never really made a run and Hancock put the game away with solid defense and rebound. The Hornets made 5 of 9 foul shots in the fourth to win by 14 points.

The Hornets are on a roll and they claimed their fourth win in a row with a 62-42 victory at Whitesville Trinity Tuesday.

Keown and Ferry both had a hot hand from the opening tip. Keown hit a “3” and scored eight first quarter points while Ferry swished three baskets and converted an ‘and-1’.

Trinity turned up their offensive intensity in the second period and won the frame, but they still trailed the visitors 32-26 at halftime.

The Hancock County defense held Trinity to under 10 points in each of the final two frames while the Hornets hit 9 of 12 foul shots to pull away for the win.

HCHS shot 48% from the field and were 4 of 12 from downtown. They made 16 of 22 from the stripe. Trinity’s stats were not available.