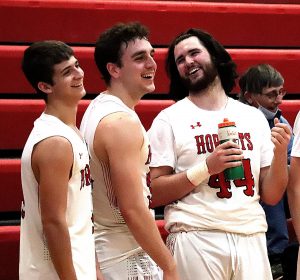 Ryan Ogle recorded a rare triple-double and Devyn Powers hit six 3’s during the Hornets 64-44 win over Dawson Springs at HCHS Tuesday.
“I liked the way we shared the ball. We moved the ball extremely well and got the looks we wanted,” HCHS coach Mike Orr said.
Kaleb Keown got rolling offensively early in the first quarter. The junior hit four field goals, including a “3” during a 13-9 run for Hancock County. Powers began his run of made 3-point baskets in the second while Keown, Ogle and Evan Ferry all contributed to help the team build a 31-22 halftime advantage.
Powers was on fire in the third frame and the crowd enjoyed watching him swish four 3’s. Keown added another from downtown while Ogle was dishing and rebounding. The Hornets led 50-31 after three.
Ogle made three baskets over the final minutes to secure his triple-double and the team cruised to the 20 point victory.
“They (Dawson Springs) were scrappy and they didn’t go away. I appreciate them coming up here for the game,” Orr said. “We were able to play some kids that we hadn’t had an opportunity to play much and we needed a win after a tough stretch of games.”

Meade County
The Hornets let an early lead slip away during a district loss to Meade County Friday at Brandenburg. The Green Wave won by a final score of 61-51.
“They spread us out and they hit some shots. They utilized their team speed and that hurt us,” coach Orr said. “We’re frustrated. We wanted to come up here and win this, but Meade has a solid team.”
The Hornets were looking good to begin the game. Kaleb Keown hit a “3” and Ryan Ogle scored two baskets to lead HCHS to a 15-9 advantage in the first frame. Hancock County led 17-10 early in the second when the home team began to close the gap.
Five Green Wave players knocked down 3-point baskets during a 21-11 third quarter run that left Meade County ahead 30-26 at halftime.
Trent Knoop carried Meade County during the third frame by splashing three 3’s. Ogle hit three 2-point baskets for the Hornets, but the home standing Wave pushed the lead to 49-36.

Hancock County made a run at their district rivals in the fourth. Devyn Powers hit a “3” and Keown scored three times. Evan Ferry made 2 of 2 from the foul line and Luke Brown scored. The Hornets cut Meade’s lead to six before Grant Beavin sealed the win by sinking 6 of 6 from the charity stripe down the stretch.
Hancock County shot 43% from the field, they were 3 of 10 from beyond the arc and 12 of 18 from the line.
Meade shot 41% from the field, 9 of 25 from downtown and 10 of 13 from the line.
Keown led HCHS with 18 points, eight rebounds and two blocked shots. Ogle had 13 points, two boards and a block, Powers had seven points and three boards, Ferry had six points, two boards and seven assists, Landyn Emmick had five points and five rebounds, and Brown had two points, one board and one assist.
Knoop led the Green Wave with 20 points.