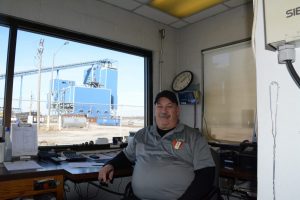 Edward Kincheloe Corley, Jr. had been  a Maintenance Electrician for 39 years at Big Rivers. When the plant closed he retired, but quickly found out retirement wasn’t at all how he had envisioned . ”I was retired for a few months, and found out it wasn’t as much fun as I thought it was gonna be,” he said. Corley decided to apply for a Security Guard position at Big Rivers and started his new position in January of 2020.

“It’s pretty interesting. I get to see a lot of people. A few guys that I worked with that are now working at the other plants, will occasionally come by and pick up some parts or something they need, and I’ll get to see them. Demolition people, delivery people…I see a lot of people during the day, and I keep a record of who comes in and out. I sit here and watch them tear these buildings down. I worked on the equipment and lighting in there. Now, it’s all going away,” said Corley.

When he was first hired by Big Rivers in 1980, all three units were up and running. “The Scrubber was put in after I was hired. I remember it going in and the Stack being built, and all that, but as far as the units, I don’t remember even seeing them from the riverbank or anything.”

“It’s kind of bitter sweet (to see it being torn down). I made a good living here for over 39 years. I really hate to see it go away. Personally, I think it still had value, as a power plant – maybe, gas-fired. I know coal is cheap, but it is also not the cleanest. Everybody has to admit that. Once all this is demolished I really hope they can find a buyer for it. This is a good property: it has rail access, river access…I’m really hoping something can be done with it. Big Rivers still owns the land.”

“I don’t really know a set date or time period for when the demolition will be completed. I’ve heard it could take a year, and I’ve heard it could take two years. They had a lot of asbestos to abate first. They couldn’t do any demolition until that had all been taken care of and as far as I know, that’s been taken care of. I think they (Big Rivers) are in the process now of getting a time table, equipment, and personnel together to kill the power going to the Boilers,” he said. “Once they kill the power to the units here, they can start doing the demolition on them too.”

Corley is from Hardinsburg and went to school in Cloverport. He currently lives in Hawesville with his wife, Charlene Lamar Corley. They are blessed with four children: Kevin Corley, Erica Corley, Erin Corley, and Adam Corley. His hobby’s are hunting, shooting guns, and fishing in his spare time. “Right now, my favorite hobby is spoiling my two young granddaughters,” he said. “I enjoy being with them and spoiling them. My dad always said, ‘Grandkids are your reward for not killing your kids.“