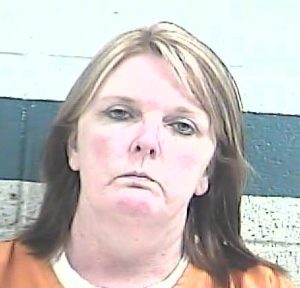 A Hawesville woman has been charged for allegedly trafficking in amphetamines after investigators conducted a controlled parcel delivery to a residence on State Route 144 East on Monday.

According to a citation from Kentucky State Police Drug Enforcement/Special Investigations West, Natoma Ellen Huff, 45, of 8476 State Route 114 East, is charged with second-degree trafficking in a controlled substance.

Allegedly contained in the three suspect parcels were 1,500 pills in blister packs labeled as Tapentadol. The items were tested by HSI, and were found to contain amphetamine and TFMPP, an alternative to MDMA – commonly referred to as “ecstacy” or “molly.”

Detectives executed a search warrant at the residence where approximately 3,000 additional pills were found, labeled as Tapentadol and Aprazalom.

Huff is alleged to have told investigators she had ordered the pills from an online pharmacy located in India, stating she did not have a prescription for Tapentadol.

Investigators wrote Huff said she had received approximately five orders of 500 to 700 pills per delivery, as well as that she given away 1,500 to 2,000 pills. She said she had taken five to six pills a day and that she had given her daughter a “handful” of pills on two occasions in the past.

Huff was lodged in the Breckinridge County Detention Center and released on recognizance. She is set to appear in Hancock County District Court on Jan. 18.

B.J. Early of Hawesville filed a notice as appearance of record as counsel for Huff on Wednesday.