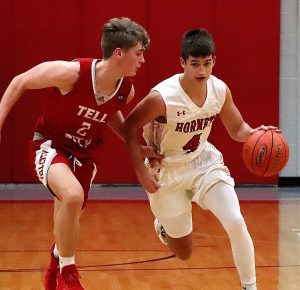 The Hornets showed  strength and consistency by winning every quarter of play during a 71-52 victory over Tell City here Tuesday.

“We weren’t as efficient as we have been lately on offense, but we were able to execute and hit some shots and Even (Ferry) was getting in the lane. That created some problems for Tell City. It was another one of those ‘team wins’,” HCHS coach Mike Orr said.

It was a battle of 3’s in the first quarter and Hancock County came out on top 18-13. Evan Ferry, Ryan Ogle and Kaleb Keown all connected from beyond the arc, while Darius Watkins and Keaton Lloyd hit for the Marksmen.

Devyn Powers hit a “3” then scored a convention 3-point play for the Hornets in the second period. Ogle and Ferry continued to produce and Luke Brown scored a basket to help give Hancock County a 40-30 halftime lead.

Lloyd buried three 3’s for the Marksmen in the third, but it wasn’t enough to keep pace with the Hornets. Keown put in six points in the quarter and Ferry was consistently penetrating the lane. Landyn Emmick scored a basket for HCHS and the Hornets increased their advantage to 54-43.

Ogle hit another “3” in the fourth and Keown scored twice on hard drives to the basket. Powers was solid at the foul line and Camden Lucas splashed a shot from downtown before time expired on the Marksmen.

“Tell City is a bit of a rival, not as much as our district teams, but they’re right across the river so this was a good win for us,” Orr said. “We just need to build off this and keep going. I thought our defense played very well at times.”

Keown led HCHS in scoring with 18 points. He added 10 rebounds and two steals.