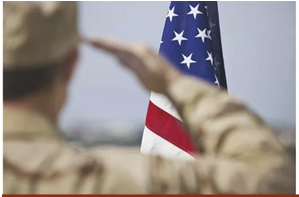 November 11 is Veterans Day, the day those who have served our nation in uniform are recognized for their sacrifices.
And we say “sacrifices,” because “service” does not seem a word strong enough to describe the lives put on hold, the time away from family, the dangerous situations, and the commitment it takes to raise one’s hand in defense of our nation.

It seems these days, “Thank you for your service,” is thrown around like an empty catchphrase. Certainly, most people mean well, but it has become a bit of a throw-away sentiment; say it, and move on down the road, feeling a little bit better that we said it.

Nearly every veteran you speak to today will have taken an oath to “defend the Constitution of the United States against all enemies, foreign and domestic; that (they) will bear true faith and allegiance to the same; and that (they) will obey the orders of the President of the United States and the orders of the officers appointed over (them), according to regulations and the Uniform Code of Military Justice.”

Those veterans of WWII and Korea took a slightly different oath, but the commitment remains the same: to defend the Constitution and the nation.

The first General Order of the Army is “I will guard everything within the limits of my post and quit my post only when properly relieved.” Though a veteran may have been discharged from active duty, no one ever relieved them from their oath to this nation.

Most of the men and women who wore the uniform live those sentiments in their daily lives, though it may have been decades since they could fit into that last uniform of active duty.
This is why you will find veterans still serving their nation and community as teachers, postal workers, first responders, medical professionals, and, yes, even journalists.

The veteran, generally speaking, is faithful, ethical, and just, in their approach to service and being a good citizen. This is why you will often find veterans serving their community in a volunteer capacity and giving of themselves for the betterment of others less fortunate.
So thank a veteran for their sacrifice today, and may we work toward a world where we no longer need men and women to put on a uniform to face an enemy.

Posted in News and tagged defend the Constitution, first General Order of the Army, Veterans Day, Veterans of WWII and Korea