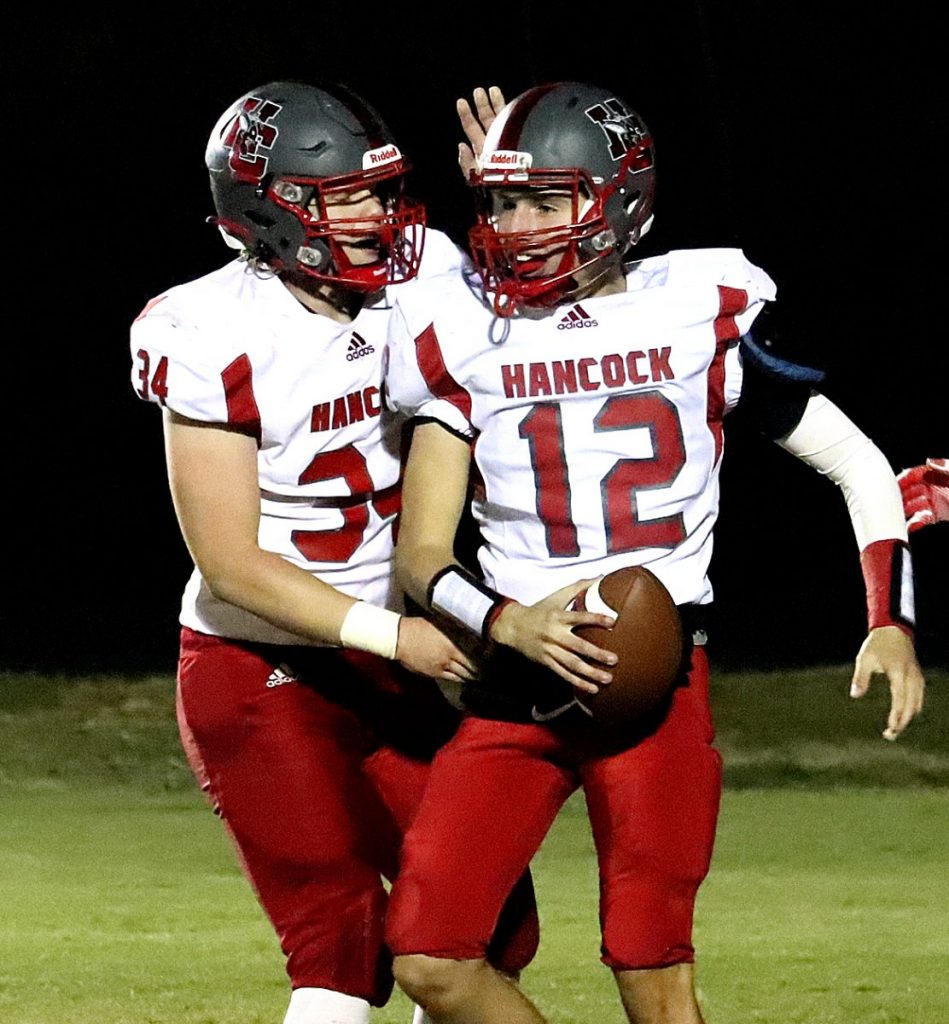 It was sweet revenge for the Hornets when Hancock County defeated Todd County Central in an opening round game of the Class 2A football playoffs Friday at Elkton. Jack Duncan scored the go-ahead touchdown late in the fourth quarter before Drew Lyday intercepted a pass in the end zone to secure a 14-6 victory for HCHS.

“It was a good win. To go two hours from home for a playoff game and come out with a win was a good deal. We looked back to when we last won a playoff game on the road and the best we could come up with was the 1999 season,” HCHS coach Bobby Eubanks said.
Hancock County (7-4) moves on to play Owensboro Catholic (6-5) in a second round contest this Friday at Steele Stadium in Owensboro.

The Hornet defense came up big Friday night when they stopped the Rebels on a fourth down try on Todd’s first possession of the game. The Hancock offense then marched down the field and scored on a long drive that consumed the quarter.

Drew Lyday connected with Logan Willis on two successful pass plays during the scoring drive and another to Austin Volocko that set up a first and goal at the one yard line as the first quarter came to a close. Noah Mize then carried the ball across the goal line for the touchdown to give the Hornets a 6-0 lead.

Jake Frames made a big play for the Hornet defense when he burst through the line and hit a Rebel running back in the TCC backfield. The senior lineman caused the back to fumble and Mize made the recovery, giving the Hornets possession at the Rebel’s 42 yard line.

The Hornets got backed up by a swarm of penalty flags before Aiden Weatherholt made a 21-yard reception on a pass from Lyday. Weatherholt collected a first down on a run to the left and the Hornets later had a first and goal at the Rebels’ five yard line. The drive ended when a Lyday pass attempt was intercepted near the goal line.
The teams went to halftime with Hancock County leading 6-0.

Second Half
The Hornets got the ball first to begin the second half and on the second play from scrimmage Willis landed on his head. The fullback hurt his neck on the play. He was treated on the field and eventually taking to a local hospital in an ambulance.

Willis was released and is doing ok. “He’s banged up but he’s getting some therapy,” Eubanks said. “There’s a good chance he’ll play Friday.”
Todd County Central later began a drive in Hornet territory after a punt by the Rebels hit a Hornet player. The ball was recovered at the 38 yard line.

Todd quarterback Gavyn Nolan ran for a first down to the 25 then Omarion Riddick sliced his way to the two yard line. The senior running back carried in for the TD on the next play to tie the game at 6-6. Jack Duncan and the Hornet defense stopped Riddick on the conversion attempt to preserve the tie.
The teams traded punts as the third quarter was winding down, but Volocko mishandled the ball and the Rebels recovered near the Hornets’ 20 yard line.

Nolan gave TCC a first and goal inside the 10 yard line after a nice run around the left side. The Hornets got a break when a bad snap resulted in a 13 yard loss for the Rebel offense, and home team later turned the ball over on downs early in the fourth quarter. The defensive stand by Hancock County gave the Hornets a first down at their own seven yard line.

Mize gave the Hornets life when he broke free down the right sideline for a big gain to the 41. Two plays later it was Duncan on a swing pass and the junior ran over half the Rebel players before finally going down at the 19 yard line of Todd County.

Another great run by Mize gave the Hornets a first and goal just inside the 10. Duncan bullied his way into the end zone for an apparent TD, but the play was called back on a penalty.

The Hornets later faced a fourth–and–goal at the two when Duncan got the call. The player known as “Jack Hammer” took the handoff and appeared to be stopped at the three but he kept fighting and, with help from his linemen, pushed the pile all the way across the goal line for the go-ahead TD.

“I don’t know how we did it, but we needed it,” Duncan said later.
“Jack just muscled his way in. He wasn’t going to be denied,” Eubanks said.
Landyn Emmick gave the Hornets some breathing room when he caught a 2-point conversion pass from Lyday.

The Rebels now had their backs against the wall, trailing 14-6 with six minutes on the clock.
On the ensuing kickoff Colin Johnson made the tackle and stripped the ball from the ball carrier. Emmick made the recovery for the Hornets and the players celebrated the play.

The Hornets were running the clock but Weatherholt was stripped of possession and the Rebels recovered with 2:30 remaining. The Rebels worked the ball up the field and were in position for a possible score at the 16 yard line. Nolan threw to the end zone with time running out and Lyday made the biggest play of his career when he intercepted the pass to secure the playoff victory.

“Drew came up big again. He intercepted a pass in overtime at Butler County to end their chance,” the coach said.
“All the guys played so hard. It’s a big deal for our team to win so far from home and give us a chance to play and win a district championship.”

The stats
Lyday completed 6 of 9 pass attempts for 109 yards, with one INT. Duncan had one catch for 36 yards, Willis caught two for 28 yards, Volocko had two receptions for 22 yards, and Weatherholt caught one for 21 yards.

Duncan led the defense with 10 tackles, including one for a loss. Christian Richards and Weatherholt both had eight stops and one TFL each, Volocko made six tackles, Emmick made five, Frames (TFL) and Lyday had four each, JT Richards, Johnson and Mize all had two stops each, and Alex Basham made one tackle.