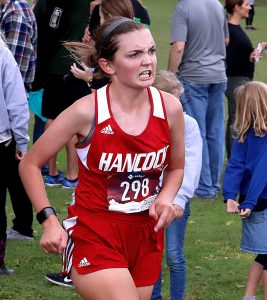 “This was a pretty typical post-Fall Break race,” Hancock coach Wes Meserve said. “We typically run really strong before the break, like we did at Tell City, and then have a little slower race coming back. I think the change in routine that week messes with our athletes’ performances.

“Having said that, we had very good races out of many of our middle school runners. Hunter Stephens ran a very strong race and this should be a confidence boost as we prepare for the postseason. Lyla DeJarnette and Ellen Meserve both ran very good races as well. They’re finally starting to have the endurance to really push hard the entire length of he race.”

“We were shorthanded with Izzy Ross and Sydney Weatherholt both out, but I was still pleased with what I saw,” coach Meserve said. “I felt like Carolina finally stepped out of her comfort zone and pushed herself really hard. With young runners, it takes time for them to learn what they can and can’t handle.

“Aly was persistent. I wasn’t sure how she’d handle having Carolina so far ahead of her at the mile mark, but she never quit and ended up moving into the number one spot for our team. None of our girls were very happy with their times, but I saw a lot of good things,” the coach said.