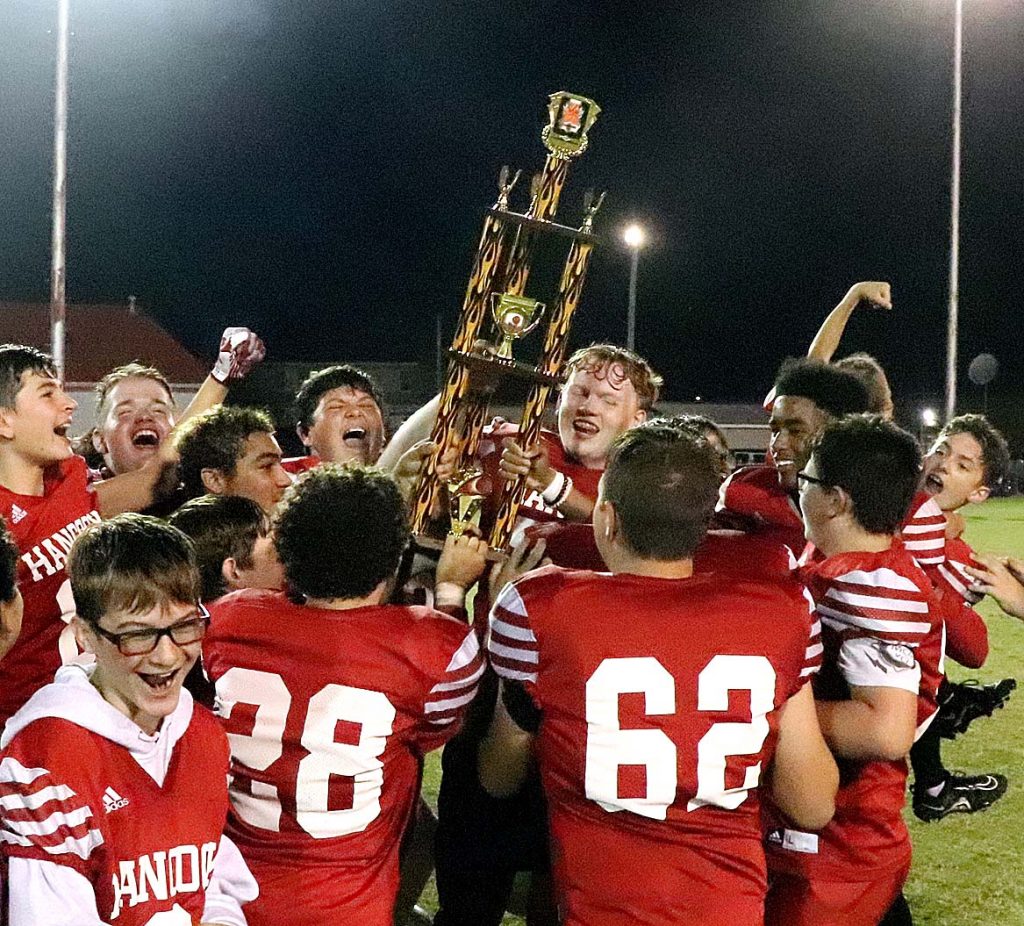 The HCMS 8th grade Hornets were just too much for Grayson County to deal with. Hancock County dominated on both sides of the ball during a 26-0 victory in the Green River Valley Conference championship game played here Tuesday night. The Hornets finished a perfect 9-0 on the season.

“Our defense is pretty potent. Our front five really carried us all season long. Cade Herndon, Tristan French, Cooper Jones, Lawson Ward and Lukas Anderson set the tone for us to where our linebackers only have to worry about sweeps and our DBs can really sit back. They’re all aggressive. They love to practice and they love to play. This was very satisfying.”

Tuesday’s title game actually ended at halftime when Grayson County packed it in and headed back to Leitchfield. Their coach was heard to have said that they had three injured players and wanted to get out before anyone else got hurt.
“I can’t believe they quit, I’ve never seen that before,” Kessans said. But, I have a feeling we were going to put up another 26 points in the second half.”  Cooper Jones scored first with a 3-yard TD run on the opening drive of the game. Jack Roberts ran in the 2-point conversion to make the score 8-0.

The Hornets went ahead 10-0 soon after when Jones hit the Grayson County quarterback in his own end zone. The QB threw the ball away but was flagged for intentional grounding, which resulted in a safety.
Roberts got loose for a TD later in the quarter when he ran 26 yards towards the left pylon. Jones then threw a jump pass to Roberts for a conversion that put HCMS ahead 18-0.

Malachi Davis made a huge hit on the sidelines as the Hornets defense was dominating the action throughout.
Ross Powers had several big gains on the team’s final scoring drive. The fullback banged his way to the one yard line before Jones carried the ball across for the TD. Roberts added the conversion to make it 26-0 at intermission/end of game.  Offensive and defensive stats were not available at press time.

The Hornets (8-0) took the lead in the first quarter when Jack Roberts scored on a 25-yard TD run. TJ Artis added a 2-point reception from Cooper Jones to make the score 8-0.
Jones carried the ball over the goal line for the next Hancock touchdown. The quarterback ran a keeper for a 10-yard score before Powers added the conversion to make the score 16-0.
Powers got the call on the next drive and reached paydirt after a 12-yard TD run. The Hornets led 22-0 after one quarter.

Powers got his second TD early in the second quarter. Good blocking by the offensive line sprung the fullback and he did the rest, running around the right side for a 32-yard TD.
Memphis Ball scored the Hornets final TD on an 18-yard run later in the quarter. Malachi Davis added the conversion to give HCMS the 36-0 lead at halftime. The second half went by quickly as the clock was running continuously by rule. The defense played exceptionally as they secured another shutout.

Stats
Jones and Powers led in tackles with 3.5 each, and Tristan French and Lawson Ward had 2.5 stops each. Lukas Anderson had two tackles and two fumble recoveries, Blake Haycraft had two stops and one recovery, Eli Embry and Cade Herndon made two tackles each, Trey Riley had 1.5 stops, Artis had one tackle and one sack, Jack Roberts, Brooks Roberts, NaGarren Bush and Keegan French all had one stop each, and Carter Lyday had one tackle assist.

Powers led in rushing with 97 yards on seven carries. Jack Roberts gained 35 yards one two runs, Artis ran twice for 21 yards, Ball had 18 yards on his only carry, Denarius Majors ran once for 13 yards, Jones ran once for 10 yards, Bush had one run for nine yards, and Lyday one carry for -2 yards.