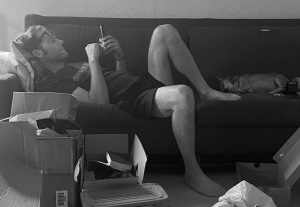 This week I learned a little bit about false alarms and being falsely alarmed.
Last week I was unable to receive my chemo treatments for stage four esophageal cancer because my white blood count was too low. That, at least to me, was alarming. Until that point all of my blood work had come back improved and my CT scan showed the cancer was shrinking.

I’d have to wait a week and try again this week. It seemed to me that we were just giving cancer a break so it could grow uninhibited and spread all it liked. I didn’t like the sound of that, but what other options did I have? It’s not as if I have a home chemo kit I could throw on in the meantime.

Late yesterday, as I was lying in bed hooked to my feeding machine, my fire alarms in the house started going off – all seven of them. I wasn’t exactly in a good position to run outside and start saving my prized possessions, so I really hoped it was something small.

When I bought this house and had the electrical inspected I had to buy a detector for every bedroom, plus one for each hallway that also detected carbon monoxide. They also all had to communicate with each other and audibly say what’s going on.

Last night they did their job, but far too well.

“Fire!” my alarm calmly stated as the alarms pierced the night. They’re very loud, which I guess is the point.
My sister went upstairs and checked everything over and found nothing, but she tried to silence one up there and it said there was too much smoke to be silenced.
Only there was no smoke.

Then three more times during the night and into this morning the alarms dutifully sounded, calling my attention to smoke and fire that, by all indications, didn’t exist.

On Monday I went back to chemo and it was much the same. My white blood count had risen quite a lot, well into the acceptable level, and the nurses there told me it’s no big worry to have to miss an occasional treatment like that and that it can even be a welcome respite for the body to take extra time to recover.

My body did recover and I got my treatment. No alarm here.
Now if I could just figure out how to get my fire alarms to chill out a little bit.