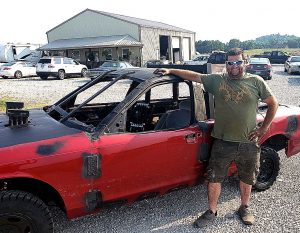 If you like action then you’ll want to come to the Hancock County Fair on Saturday night to witness the awesome spectacle that is the 2021 demo derby.

The derby is always a big draw at the fair and this year’s smash up might be the biggest and best ever. Promoter Eric Adkins thinks it will be.

Drivers come from all around to test their skills and their nerve in the fair’s demo derby.

This year there is a new contestant from Hawesville who hopes to win it all. His name is Brandon Sanders and he’s not just driving for himself.

“I’ve always been interested in demo derbys and now I got the chance to do it,” he said.
Sanders, 34, says he’s going to try to win it, but he’s also driving for others.

“My uncle Denford (Sanders) passed away recently and I wanted to do something for him and for Bryan Barnett, Jr.. I want to put some decals on my car to represent them, and also for my daughter, Olivia.”
Sanders is entering a Ford Crown Victoria because it’s a “pretty tough car”. He says he plans to be himself and have fun!

The man who won the main event at the 2019 Hancock County Fair Demo Derby is Blake Tucker of Hardinsburg. Tucker won the windshield division in 2019 and he’s confident that he’ll do it again.
“I’ve been doing it for 35 years and I’m almost done,” Tucker said with a smile. “I’ve got two boys that do it so I’m trying to hang in for a little while longer.”

Tucker will enter his Buick Roadmaster, the same car that he drove the last time he won at Hancock County. He is again the man to beat.

The “Mad Dog” winner from 2019 will also be back in action this year.
Gavin Haycraft of Hardinsburg won that award for making the hardest hits in his class during the derby in 2019.

When asked how he managed to win that, Haycraft simply said, “hold the gas”. He says he going “hammer down” again this year.