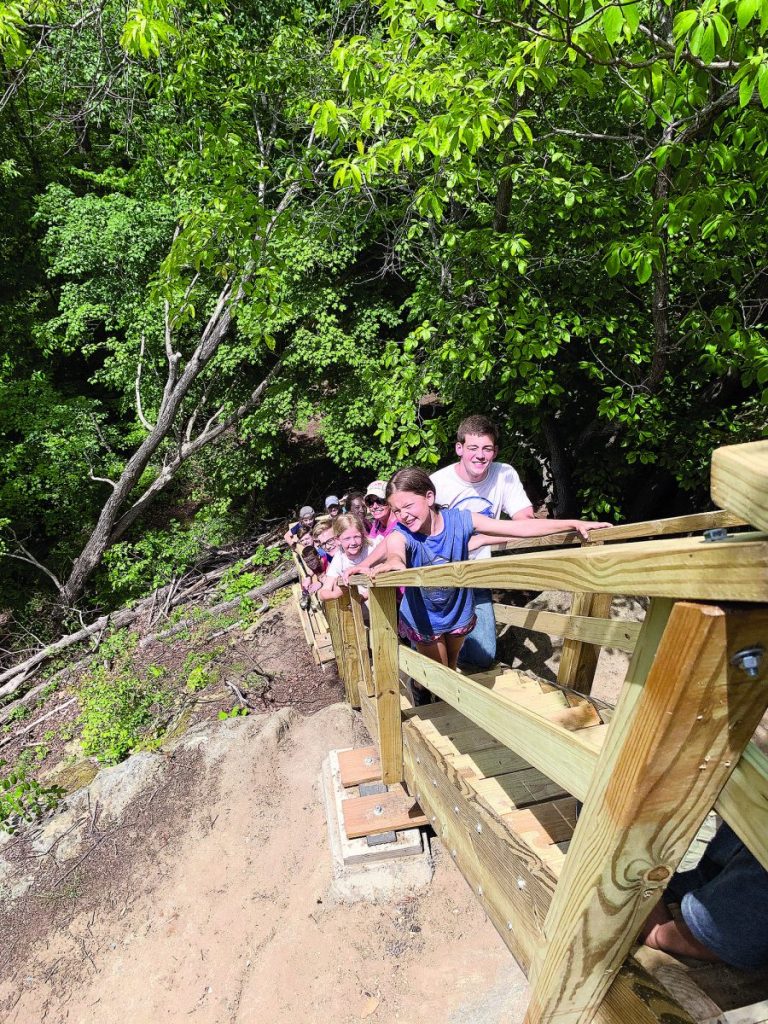 Last week workers constructed a series of steps to the top of Jeffreys Cliff at the Mossy Gap area. The flight of stairs takes advantage of three natural terraces as it winds its way up the cliff face. A small ridge about 40 feet tall sits at this point, and the stairs sit on top of this ridge and goes up another 70 feet to allow access to the top of the cliff. The two flights of stairs consist of a total of 50 steps.

“This location was probably the best,” Hancock Heritage Commission President Steve Canepari said.
Prior to installing the steps, Canepari cut the posts, rails and planks for the steps at his home so all they needed to do was simply put the steps together. Constructing the steps took quite a bit if ingenuity due to the rugged nature of the area. Though trails exist to the cliffs, none of the trails allow for pickup trucks or other such equipment to access the site. It required UTVs and old-fashioned manpower to get the supplies to the build site.

“We manhandled everything up there,” Canepari said. “We built the steps as we went.”
Crews started the process of building the steps last fall when they poured the first concrete paddock for the steps. The crew consisted of Canepari and his brother-in-law Dale Eye, Richard Basham, Tim Meserve, Craig Waldie and Scott Waldie. The group used 28 bags of concrete in the first pour, and brought it and the water necessary to mix the material in by UTV. They mixed the concrete in a wheelbarrow and created the landing.
“That is a lot of concrete and it was all by hand,” Canepari said. “It is all anchored down in sandstone.”

Canepari said they drilled holes in the sandstone and set the rebar in the rock using epoxy, built the forms for the concrete and then poured the material. He said it took about a half a day of work on each of the three landings. They let the concrete cure prior to constructing the steps. They used 2×12 beams as the base for the steps. “They are not going anywhere,” Canepari said.

The county road department sent three workers to help them construct the concrete landings. As they went up the side of the cliff, it took more workers to do the work. Moving the concrete took a lot of effort. They mixed it at the bottom of the cliff in the wheelbarrow, and then simply passed a bucket to each other to get the concrete up the cliff.  “We made like a bucket brigade,” Canepari said.

They finished the concrete landings about two and a half weeks ago, and started on the stairs last week. It took two days to build the steps, and the crews finished Wednesday.
“It wasn’t complete, but it got us to the top,” Canepari said. “Later we came back and installed hand rails.” 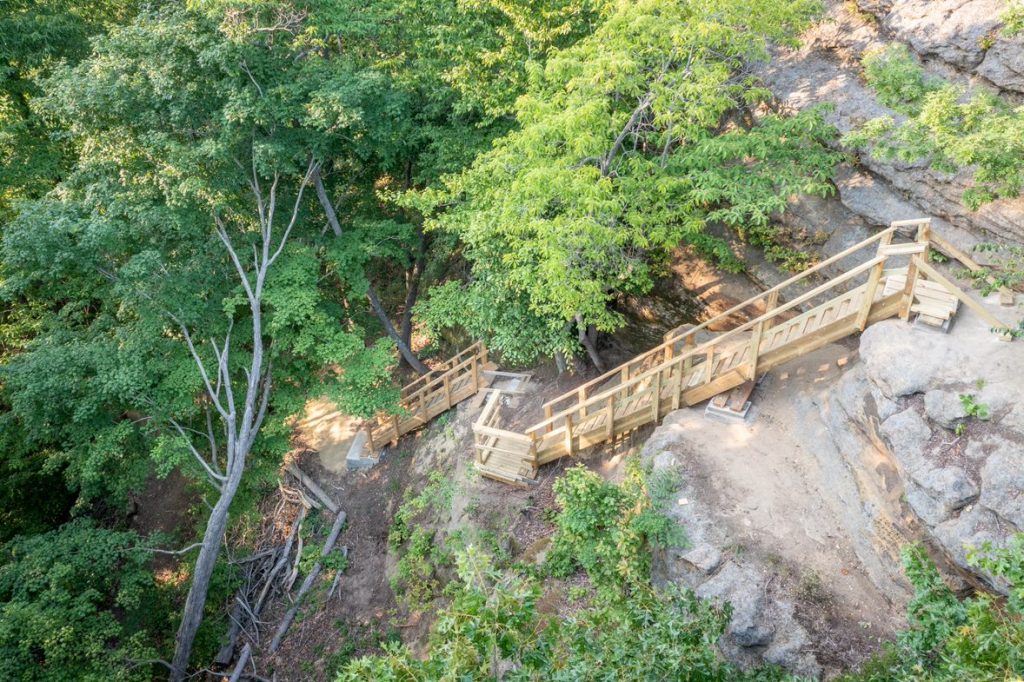 The stairs do not go up in one long section, but are broken up into two units. The first section connects the bottom landing to the first terrace part way up the cliff. It turns right at this point onto a small landing to the second flight of the stairs. It goes up and over the second terrace, with beams anchored on the concrete paddock for support. It then continues up to the last terrace where a small exit deck sits with handrails to help people getting on or off the steps.

Canepari said the crews constructed a landing complete with guardrails at the first terrace out of fear of people coming down the steps going too fast and falling over the edge. The deck gives an added measure of safety.  “We finished the steps Wednesday (May 19) and the first set of kids went up Thursday,” Canepari said.

Prior to the installation of the steps, a rope existed at this point to help hikers go up and down the cliff. When they installed the steps, the crews took down the ropes. Canepari said a Mr. Weese with the Kentucky Heritage Commission, one of the groups that gave the commission money for the Jeffreys Cliffs Conservation and Recreation Area, said the ropes needed to come down. Canepari said he reached an agreement with Weese that when the steps were finished, he would take down the ropes.

Canepari said the process to create the conservation and recreation area started in September of 2014 when was asked to see if he could do something to get the area turned into a park type area. At the time the Harris family owned the land on top of the cliffs, and wanted to donate the land to the county. Canepari researched what could be done and found grant monies available for the project.

The Hancock Heritage Commission received a total of approximately $750,000 in state grants to create the area. The commission used roughly $500,000 of the grant money to purchase the land around the bottom of the cliffs, survey the land, install fencing, conduct the necessary appraisals, and to also construct a parking area for the conservation area.

Canepari said over two miles of trails exists in the Jeffreys Cliffs conservation area, with trails on top of the cliffs and also on the bottom. He said the area also has an entry on Google Maps, and since its approval around 50,000 people received directions for the site from Google.