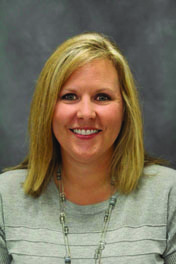 Hancock County High School will have an interim principal for the remainder of the school year after Ashley Gorman announced her resignation last week and has already left the district.

Gorman told teachers at the school on March 15 that she was resigning, and just four days later she was no longer at the school. That Friday, her last day, Gorman was scheduled for an interview for this story, but was unavailable at the scheduled time and did not return a call.

Gorman had been principal at HCHS since the 2016-2017 school year when she originally served as interim principal after the departure of Rick Lasley, who took the principal job at Apollo High School barely a week before the start of school.

After that interim year she was chosen from several candidates to fill the position permanently, almost exactly four years ago in March of 2017.
Gorman’s ties to the school ran deep, having taught English there for 11 years prior to being named principal, and having graduated as HCHS salutatorian in 2001.

Superintendent Kyle Estes said he didn’t have a lot of information on Gorman’s resignation and directed specific questions to her.
“She’s taken a job outside of public education in the private sector supporting schools,” he said. “You’ll have to speak with her to get more information beyond that.”

The vacant principal spot will be filled by current assistant principal Ginger Estes, he said, while the school’s site based council accepts applications and chooses a successor, whose contract will begin on July 1, 2021.

That council is made up of three teachers from the school, two parents, and the principal acting as chairperson. In the principal’s absence, Kyle Estes will be acting as chairman during meetings as they assess candidates and conduct interviews before ultimately offering the job to someone.
“If I had to guess we’d like to do that before the middle of May, is I think a reasonable timeline,” he said.

Through this school year Ginger Estes’ old role of assistant principal will remain empty, with the responsibilities shuffled around to other staffers.
“We have competent people in current roles that can step up to the plate and do a more than adequate job, so I think it’ll be business as usual,” he said. “Mrs. Gorman will be missed, but we still have a job to do and everyone knows that and I think we do it very well.”