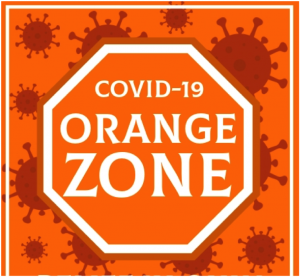 Hancock County’s COVID-19 incidence rate dropped enough to bring the county back to orange on the state’s color-coded map last Wednesday, after being in the red since last October, which has the county judge-executive hopeful of a return to normal for public events this year.
As of February 23, Hancock County had an average of 13.1 new daily cases of the virus, based on a seven-day running average, extrapolated out to a population of 100,000. Any rate 25 or above turns a county red and initiates tighter restrictions from the state on schools and public spaces.

The most recent number, which was far below the state average of 23.22, meant Hancock County was the 26th lowest in the state, compared to being the highest for two days in late January.
Other counties connected to Hancock have dropped to orange too, with the exception of Daviess County, which remained in the red with a rate of 26.9 per 100,000.

Judge-executive Johnny “Chic” Roberts was pleased to see the numbers finally dropping so low.
“We’ve had bumps in the road like every other county and maybe we’re headed back in the right direction now,” Roberts said. “I don’t know if it’s due to the progression of the virus or to vaccinations or a combination of both.
“Maybe we’re getting close to herd immunity, I’m not sure,” he said. “But it’s welcome news, whatever it is.”

Right now the county’s governmental buildings are open to the public, with masks required, save for the county operated senior centers.
“Until we get more specific guidance with the senior citizens center we’ll leave those closed and we’ll continue to operate as of now with masks required in the buildings,” he said.

Lower virus incidence rates might translate into a short-term future where public gatherings and events are held again, he said.
“Going forward, if you’re looking two or three months out, we’re trying to kind of look at 2021 as normal as you can and looking to schedule some of our traditional events that we’ve had,” he said.

One of those events is the annual Fourth of July fireworks display at Vastwood Park, which was canceled last year because of the pandemic. But that same virus has affected businesses like the one that puts on the show.
“With the company that we used in the past for fireworks, this pandemic’s caused them to stumble a little bit so we’re having to work through that some,” he said.
“But as of now if you’re looking two or three months forward we’re trying to plan like it’s going to be somewhat of a normal year,” he said.

Of course that all depends on the virus not spiking again, or something else unforeseen.
“It’s really been difficult to make solid predictions or plans what’s going to happen,” he said. “So everything going forward is predicated on the virus just like it has been the last year, so hopefully we can get back to some semblance of normalcy, whatever that looks like.”