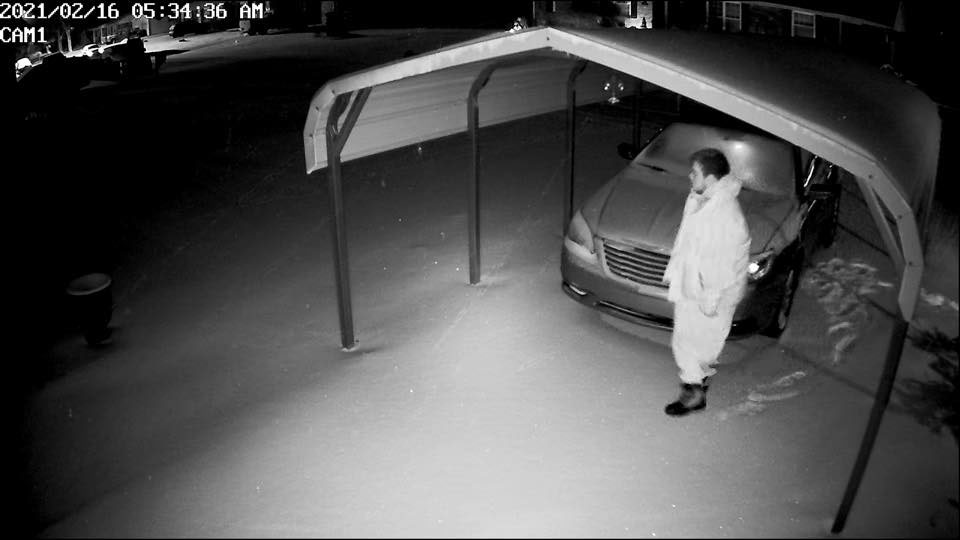 While there’s no official list of ideal burglary conditions, Tuesday morning’s had to be near the top of the list for the worst: single degree temperatures; fresh, undisturbed snow; and multiple security cameras. None of those were deterrents for one Lewisport juvenile, however, who burglarized multiple vehicles in Hancock Park and was easily tracked by his footprints in the fresh snow and captured clearly on multiple security cameras.

Many residents on Robin Circle awoke Tuesday morning to find new footprints in their yards, the lone prints after a night of snowfall, which lead to and from cars, their homes, and their outbuildings.

“My daughter, she’s the one that saw the tracks in our backyard and said something about it,” said Shane Brown. “She thought we’d been out. Of course I knew we hadn’t been out, so I started looking on our cameras, and I noticed a guy was in our backyard.”

Brown is part of a Facebook group for residents of the park and found that someone else in the group from the other side of the U-shaped Robin Circle had posted a video of a guy who’d broken into their car too. That set off a quick flurry of action among other residents, who shared photos of the burglar to friends outside the group in the hope that someone would recognize him. The photo was also posted to the Lewisport Police Department’s page.

But first they had to figure out exactly what he did, which was made much easier by the tracks he left in the otherwise untouched snow.

Brown followed the tracks in his yard to see where the burglar had been.

“He tried to get in our vehicles, you could tell,” he said. “I could see the tracks where he tried to get in my truck… He came up to our back porch, I guess checking to see if our house was unlocked and then he went out to the building.”

“I reload ammo and stuff back there sometimes so I had a bunch of empty boxes of ammo so he took the drills and tuff out and put all those empty boxes and bagged those up,” he said. “I could see he went around the back of the building and he left them on the fence hanging there, the two bags. I guess he was aiming to come back and get them.”

He either forgot them or realized that the boxes were empty, because Brown found the bags still on the fence.

Brown continued to track the footsteps and they led to Poplar Grove Apartments, which are just beyond the farthest border of his backyard.

“I knew it come from Poplar Grove somewhere, but once it got to the apartments I kind of lost the tracks,” he said.

The other video posted to the group showed the unknown person much clearer, but Brown noticed that the timestamps seemed to show taken his time going up and down the street.

That other video was posted by Bob Lee, who caught the burglar on camera getting into his car after being warned by another neighbor that someone had broken into her car.

“They actually got in her car and they took her iPod,” said Lee.

On the video the person slowly walks up to his car under a carport and tries the door but it doesn’t open. He tries again and it does, and he hops in.

“The funny thing was I was positive I locked it, and if you look at the video you can see he tried to open it and it didn’t unlock and then he went back to it and it unlocked, so that was kind of weird,” he said.

“I counted the clock and he was in there for three minutes,” he said. “I thought my gosh, I thought for sure when we got in there everything would be gone.”

As far as he could tell though, the guy only took change, and only the big change, leaving nickels and pennies behind. Other more valuable stuff was left behind.

Even stuff that might have been handy in single digit temperatures, like a scarf, were also left.

Aside from the odd timing of being out on one of the coldest nights in memory and making clear tracks in new snow, Lee said he found it odd that the burglar didn’t seem to be worried about hiding or in any kind of hurry.

“He had to be high because he just took everything slow,” he said. “He even looked up at the camera when he came up out of the car.”

Others on the Facebook group said the thief had been in their yards or in their cars too, partly evidenced by the tracks, and it seemed the guy was after whatever he could easily grab that had value and would fit in his oversized sweatpants.

Within hours people recognized the alleged thief, who turned out to be a juvenile who they said lives at Poplar Grove Apartments.

Lewisport police chief John Garner posted shortly after lunch time on Tuesday that the person on the video was a juvenile who had been identified and would be charged.

“The juvenile from the thefts at Hancock Park this morning has 15 charges pending,” Garner wrote. “We appreciate all those that provided video and those that identified the person involved.”