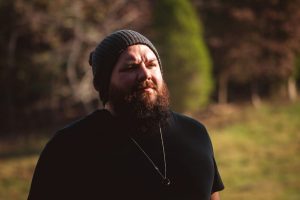 When Josh Merritt was a kid running around the countryside outside his great aunt and uncle’s trailer in Reynolds Station, KY, he couldn’t have imagined that he would one day release an album commemorating those days, but the dark circumstances that brought him there and the solace of that place are the center of his appropriately titled album “Reynolds Station,” available on November 20.

Merritt spent his first seven years or so of life in Reynolds Station, where he and his younger brother Jacob stayed with Wilma and Marshall Harris in their trailer on Fred Morris Road, because the boys’ mother wasn’t able to raise them.
“My mom, she went through a time in her life where she was struggling with drug addiction and during that time I lived out there with my great aunt and uncle,” Merritt said in an interview Tuesday. “The album is about that time in my life.”

Tonya Cartwright has been sober for 10 years now, he said, but the years when she and her brother and sister were wrapped up in making and selling drugs made for a rough childhood, with the farm providing the lone bright spot growing up.  “We were kind of saved by that place,” he said. “When I think of that farm, it was more of a retreat. Once we were dropped off there, it was like we were protected a little bit. It was far away from everything and darkness didn’t seep back in until we went back home.”

The Harris’s let the boys live there and gave them a place to be safe but also to be normal boys.
“They had this little bitty two bedroom trailer that we all bunked down in and it was on this 70-acre farm that we kind of ran wild on,” Merritt said.

From kindergarten through fifth grade he attended 12 different schools, including Lewisport Elementary and South Hancock, before he moved away with his dad, Paul Merritt, eventually attending three different high schools and graduating from Owensboro High.

His dad played the fiddle with his family, and Merritt inherited that musical talent.  “I started playing an upright bass when I was 8 years old,” he said. “It’s a huge instrument and when I first learned to play I had to stand up on a kitchen chair to even hold it and reach it.”

He began playing with the family during jam sessions and has been making music ever since. In fact, beginning at around age 24, he quit his job in heating and air and has been a full-time musician.

“Reynolds Station” is his first studio album, produced in Nashville by Shannon Lawson, a musician who charted two songs himself in the early 2000s and has written hits for others, and recorded with musicians like the current keyboard player for Lynyrd Skynyrd and the bass player for Sheryl Crow.  The songs are inspired by Merritt’s childhood, and while he said they’re not completely biographical, they are fairly accurate.

“There’s a song called ‘The High’ and it’s almost my mom’s situation exactly,” he said. “(It’s) about this person that’s just getting into the rougher side of drug addiction at the start and by the end of it, the third verse, they’re dropping their kids off and telling them goodbye because they’re going to do a prison stint.”
Another song is called “Run” and it was inspired by something that happened to his late aunt, who committed suicide in 2017.

“It was a story I can remember where she was running from this guy that was coming after her that she was dating at the time,” he said. “She pulled up at the house and she was all scared and didn’t know what to do and my great aunt told her she said just run, just get out of here… She gave her some money and just told her to take care of herself and to run.

“There’s even a shout-out to Hancock County in that song,” he said. “There’s a line that says ‘you’re halfway through Hancock County with the pedal down.’”
Writing about the pain of his childhood was difficult enough, but it was made more so when he was writing about his mother, who still lives in the county and whom he loves.
“It was really hard,” he said. “I actually sat her down and we had a whole conversation about it. It’s not like we don’t talk about it but obviously it’s a touchy subject for anybody that’s went through it.
“But,” he said, “she understands it the same way that I do. She knows that this album is meant to be something that helps people, something that people can relate to, and something that somebody can take something positive from in the end, hopefully.”

That communication led to one of the most upbeat songs on the album, “Live With That.”
“I said wow, I wrote this dark album and it’s a very somber album and I said I really need a more upbeat song,” he said. “How do you make an upbeat song out of this subject matter?
“She was like, here’s the deal, out of all of the evil stuff that happened, the bad stuff that happened, when we first started this stuff we didn’t know how bad it was going to be,” he said. It was exciting; we were having fun. So she was like, this is how the whole thing got started. Tell this story, and tell the truth.”
“The truth is we were having a lot of fun, too much fun,” she told him. “And everything just kind of snowballed out of control as it does.”

“That’s been the big thing with this album, is it kind of highlights a very sensitive time in my mom’s life but I think it’s important to mention that she beat the odds when it comes to this stuff,” he said. “God bless her, she beat the odds when it comes to drug addiction and she’s really doing well for herself now.
“I was glad that she let me tell this story and she let me tell it however I wanted to,” he said.
The album ends with “Tonya Jo,” a song dedicated to his mother.

Merritt is hoping the album is well received, but he’s already had some musical success, having opened for Charlie Daniels, Hank Williams and others, but he judges the success by how it impacts the listeners.
“You never know, you can make something and think you’ve got it nailed and just nobody gets it,” he said. “And luckily so far it seems everybody’s kind of latched on to what I was trying to talk about, what I was trying to do.”

“I love Hancock County, I always have,” he said. “I’ve had a lot of homes but this one’s always been the one that stuck with me.”  The album will be available for purchase at joshmerritt.com Friday and will be available on all streaming services.
dave.hancockclarion
@gmail.com