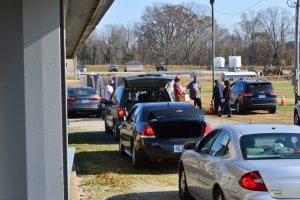 Audubon Area Community Services held a food giveaway Friday, and it went over well. The drive gave away 2,800 boxes of food.
“It was above and beyond what I expected,” Audubon Area Community  Services Coordinator Julie Newton said. “I did not even know how long of a line it was until I looked up and saw the cars backed up on (state Route) 1389.”  At one point the line stretched from the fairgrounds, along state 1389 to the intersection with U.S. 60, and along U.S. 60 east for approximately a quarter of a mile.

Newton said she slated the give away to start at 10 a.m., but vehicles began to line up at the Hancock County Fairgrounds at 7 a.m., before the two semis arrived with the food. By 8:30 a.m. crews unloaded the food, so Newton started the give away.

“We had everything gone by 1 p.m.,” Newton said.
Each box contained fruit, vegetables, milk, eggs and a chicken. The monetary value of the food given away Friday eclipsed $111,000.

The food came from the United States Department of Agriculture Farmers to Families program, a care relief program. Newton said Friday’s event was the fourth food give away from this particular relief program. She said it is part of the department of agriculture’s response to the current pandemic.  “It is a COVID-19 program,” Newton said. “If it was not for COVID, we would not be having all this food.”

Unlike most government food programs, this program does not require anyone to sign up to receive aid. In fact, people just need to show up to get the food.
“We all have been affected by COVID,” Newton said. “That is why I like this program, it does not require a signature or an income limit or anything like that. We all have been affected, we can all come and get some food.”

Newton said the food give-aways started back in the summer when officials from the department of agriculture contacted her to see if any interest existed for the food. Newton immediately said yes. “It is my fourth time doing one of these food trucks,” Newton said. “The other three times were just vegetables.”

After the earlier food give-aways some food remained, and Newton needed to work to find people to take the left over food boxes. The boxes Friday contained milk, eggs and a chicken.
“They were a hot item,” Newton said. “I did not have any left over.”

When Newton scheduled last Friday’s food give away, she also scheduled another one for November 25, which is the day before Thanksgiving.  Newton said she purposely chose that day to help families prepare a Thanksgiving meal. “It will be similar items to what was given away Friday,” Newton said. “It will just probably be a different type of meat.”

The November 25 give away is slated to start at 10 a.m., but may start earlier. She advises people to get there early if they want a box of food.  “I will start as soon as my semis get unloaded and my volunteers get organized,” Newton said.
By Ralph Dickerson