It’s official, the Hornets are District Champions!  The HCHS Hornets football team claimed the District 2 title by going 3-0 in 2020. The team was scheduled to play its final district game at McLean County this Friday, but when the game was canceled due to rising COVID cases, in both areas- especially in Mclean, the Hornets were declared champs!  Hancock County (5-1 overall) will take the #1 seed into the upcoming state playoffs.  The Hornets will host Todd County Central on November 13, at Schafer-Glover Field.

“It was a little bitter sweet yesterday (Monday) when we talked to the kids.  We talked about the loss (at LaRue) but then we got to celebrate winning the district, so that was nice.” HOrnets coach Bobby Eubanks said.

The Hornets defeated Todd Central 12-14 on a late TD catch by Kaleb Keown from Cole Dixon during the team’s regular season meeting back on October 2. 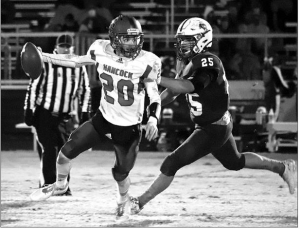