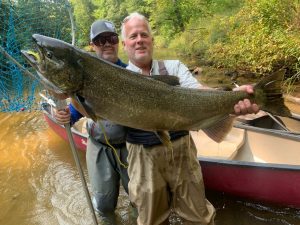 Each year Walt Allen and a group of friends head to the Pere Marquette River in Michigan to go salmon fishing. The group likes to fish the Pere Marquette due to its rustic, natural setting.
“It is the only river in Michigan that does not have a dam on it,” Walt said. “It is truly a wild river.”
Walt said he started going on the fishing trips approximately 10 years ago, but Mike Garvin started going to Michigan to fish about 20 years ago. This year the group, composed of Walt, Mike Garvin, mark Garvin, and Jeff Rummage, spent six days fishing. They went the week of September 12 to the 18. Walt said he enjoyed his trip, but he did not land any fish.
“I hooked up to several fish,” Walt said. “They were really big and wild. I hooked the biggest one I have ever hooked, or seen, but he broke me off.”
While many people use regular rod and reels with spinner bait to salmon fish, Walt and his buddies like a challenge, so they fly fish using 10-pound test lines.
“It is just fun,” Walt said. “If you catch a really big one on a fly reel, you feel like you really done something.”
The group uses streamer flies and streamer eggs, two types of artificial bait, to attract the salmon. Walt said the group gets up early and heads out to the river and fish all day. At night they come back in to their campsite and grill up food for the evening. They either grill up steaks, or some of the fish they catch. Walt said either Mike Garvin or Jeff Rummage does the cooking.
They stay at Barothy Lodge near Branch, Michigan. It is in a secluded area of Michigan, nestled in a bend of the river. Walt said the campsite contains 12 to 15 cabins, with some of them being three storey buildings.
“We are not camping out,” Walt said. “It is a nice place to stay. It has a big kitchen in it. It has a hot tub in it.”
Walt said it is a 10-hour drive to the lodge from Kentucky. This year Mike’s four kids came up to fish with them. Walt said he thinks it is the first time they went salmon fishing with Mike.
Walt said Baldwin Bait and Tackle puts out a report on the fishing in the Pere Marquette River each year. He said after their trip, the bait shop began to report large numbers of fish being caught.
“This year there were not a lot of fish in the river,” Walt said. “We were just a week early.”