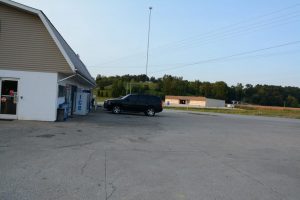 Construction continues on a new Dollar General Store, which is going up near the intersection of state Route 144 and state Route 69 Wednesday. The new chain is being built across from Weber Store, a longtime county staple, which is seen in the foreground. Dollar General opened its first store in Hancock County in Lewisport in the 1990s, in the Holland shopping plaza off Highway 60, which is still in operation today. A second store was built in Hawesville in the 2000s and the Weber location will be the third in the county.