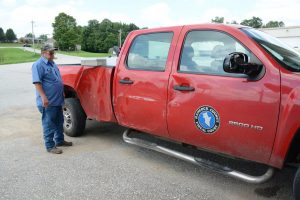 A 14-year-old boy is facing multiple felonies after stealing and crashing a county road department truck and breaking into the Hancock County Middle School early Sunday.
The boy, whose name hasn’t been released because of his age, is being held in a juvenile detention center in Bowling Green after police say he spent hours joyriding in the stolen truck before crashing it and breaking into the school.
“It was around 3 a.m. a juvenile from Hancock County broke into the county road department garage,” said Sheriff’s Deputy Jeff Hendrick, who worked the case. “(He) broke the back door in and then went into the garage and went through a window, where he got into a 2011 Chevy 2500 pickup truck owned by the county.”
He opened the garage door and left in the four-door pickup and apparently just went driving.
“(They) seem to think he put about 100 miles on it,” said Ronnie Edge, the road department foreman.
“He did a lot of driving. Nobody noticed it,” Hendrick said. “Of course that was 4 o’clock in the morning, 3 o’clock in the morning.”
Where exactly the boy went isn’t known, but he definitely made it to KY 144 because that’s where he wrecked the truck.
“There was a witness that actually gave him gas because he had ran out of gas in that area and observed him turn a curve and hit a pole out there,” he said.
When the boy was getting the gas from the witness he gave a reason for why he was out in the county truck at such an early hour on a weekend.
“He told them that his dad worked for the county and he lets him run errands every now and then,” Hendrick said. “And the guy was kind of like, well you know it’s none of my business but he probably shouldn’t do that.”
“But his dad doesn’t work for the county,” he said.
In that wreck on KY 144 he caused major damage to the truck.
“He hit a telephone pole somewhere,” Edge said. “He tore the whole side of the truck up.”
It was damaged but still drivable, and the boy eventually wound up at the middle school, where he smashed the front glass with a concrete gutter splash block, which was caught on security video.
“He just meandered throughout the school,” said Nick Boling, the school district’s director of student services.
Boling isn’t sure how long the boy stayed in the school, but the damage wasn’t found until around 7 a.m. Sunday when a teacher happened by and noticed it.
“We retrieved video surveillance footage and watched the video,” Boling said. “We showed up, walked around the school, checked for damage.”
The only damage was to the window, which was fixed as of Monday.
After leaving the school the boy again was low on fuel, which was his ultimate undoing.
Sheriff Dale Bozarth was at Powers Express in Hawesville, when the young boy drove up in the heavily damaged county truck. The fact that a county truck was out on a Sunday morning, combined with an obviously young driver and the major damage to the truck, made it easy to tell something was amiss.
“He said that he was about out of gas, or out of gas, so he pulled in there,” Hendrick said.
When asked about the truck and the middle school the boy confessed, he said, but didn’t give a reason.
“We asked him and he just ‘I don’t know,’” he said.
The truck has major damage but remains drivable, which is a good thing for the county.
“We’ve got others, but we need it,” said Edge. “But I guess we’ll keep driving until we can figure out what we’re going to do otherwise.”
He’s talked to the insurance but they haven’t said whether it’ll be fixed or is totaled, and who will pay for the damage.
“This is the first ordeal we’ve had like that that I know of,” he said.
dave.hancockclarion
@gmail.com