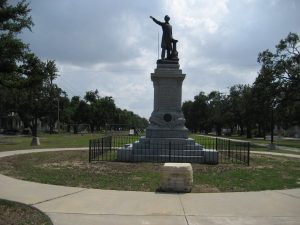 FRANKFORT, Ky. (AP) — Moving a statue of Confederate President Jefferson Davis from the Kentucky Capitol to Davis’ birthplace in western Kentucky is costing the state $225,000.  The state Finance and Administration Cabinet recorded the no-bid contract with America Industrial Contractors on June 12, the day the Historic Properties Advisory Commission voted 11-1 to remove the statue, the Lexington Herald-Leader reported. The statue was out of the Capitol the next day.  It was not practical to bid the contract because of the work’s specialized nature and limited number of companies that could do the work, cabinet spokeswoman Jill Midkiff said. Two firms with experience in safely removing statues were identified and contacted, she said.  ”Both vendors conducted site visits to assess the scope of the project,” Midkiff said. “Following these site visits, only American Industrial Contractors was able to complete the project and meet the commonwealth’s schedule.”  The 5-ton statue of Davis had stood in the Capitol Rotunda since December 1936.